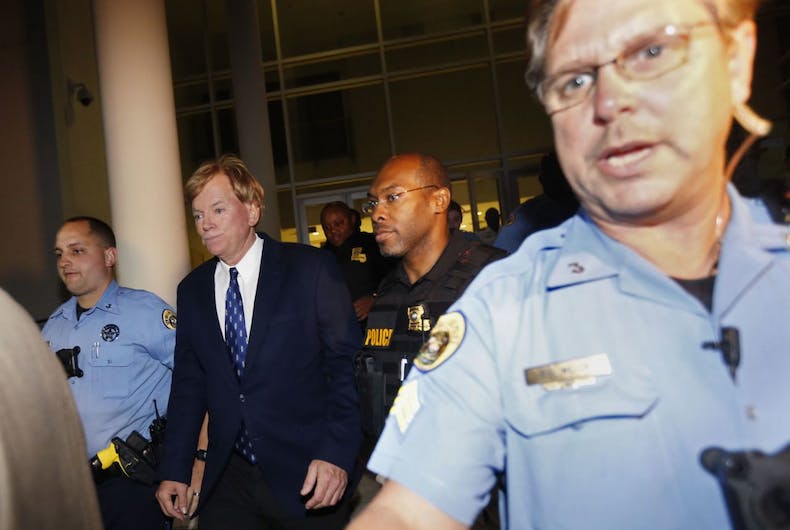 Former Klansman and current U.S. Senate candidate David Duke is hastily escorted to a police car, as protesters in the area teach for his exit, after a debate for Louisiana candidates for the U.S. Senate, at Dillard University in New Orleans, Wednesday, Nov. 2, 2016. Protestors were outside because of his presence at the historically black college.Photo: AP Photo/Gerald Herbert

Former Ku Klux Klan leader David Duke was among the candidates at the final debate for the U.S. Senate from Louisiana, which took place at Dillard University in New Orleans, an historically black university.

As expected, Duke spewed hot venom during the evening. For example, he warned white people, “It’s time we stand up now. We’re getting outnumbered and outvoted in our own nation.”

He also argued that Jews are “tribalists.” He quipped that “I don’t hate all Jews,” but only those who hold allegiances to countries outside the U.S.

Duke, who has seemed as a virtual surrogate for Donald Trump throughout this election season, encouraged everyone to vote for Trump for the presidency and himself for the Senate so they can work together to “Make America Great Again.” Earlier this summer on NPR radio, he asserted that he and Trump represent the same thing: “the ideas of preserving this country and the heritage of this country.”

According to Speaker of the U.S. House of Representatives Paul Ryan, following Trump’s tepid denunciation when Duke endorsed him during the Republican primaries last spring:

“Today I want to be very clear about something: if a person wants to be the nominee of the Republican Party, there can be no evasion and no games. They must reject any group or cause that is built on bigotry. This party does not prey on people’s prejudices. We appeal to their highest ideals. This is the party of Lincoln.”

It’s clear that Paul Ryan has no grasp on the history of his own party. For someone touted by a number of conservative political pundits as an “intellectual,” Ryan must understand his error when he asserts that the Republican Party “does not prey on people’s prejudices” or that it appeals to people’s “highest ideals.”

For example, Karl Rove’s dirty tricks, preying on people’s fears to help George W. Bush ascend to the Texas Governor’s mansion and later to the White House, have entered the annals of infamy. Throughout his long career as a political operative, Rove conducted so-called “whisper campaigns” spreading false and incriminating rumors against rivals.

When Bush challenged sitting Texas Governor Ann Richards in 1994, Rove spread rumors that Richards was a lesbian. A regional chairman in the Bush for Governor campaign accused Richards of “appointing avowed homosexual activists” to state jobs. (Well, I would hope so!)

In Bush’s run for the presidency in 2000, Rove widely circulated the fraudulent allegation that as a prisoner of the Vietnam War, John McCain buckled under pressure and betrayed his country, which made him mentally ineligible to serve as Commander in Chief. During the 2000 presidential primary season, rumors also circulated that McCain was himself gay, and that he had fathered a black child out of wedlock. In actuality, John and Cindy McCain adopted a daughter from Bangladesh.

So, Mr. Ryan, how does the Republican Party “not prey on people’s prejudices?”

In a moment of openness and candor, speaking to a group of 15,000 preachers in Dallas, Texas in 1980, influential conservative Republican strategist, Paul Weyrich, outlined an agenda that the Party would follow and expand:

“I don’t want everybody to vote. Elections are not won by a majority of people. They never have been from the beginning of our country, and they are not now. As a matter of fact, our leverage in the elections quite candidly goes up as the voting populace goes down.”

With the Supreme Court in 2013 reversing the historic Voting Rights Act of 1965, which was aimed at protecting and increasing enfranchisement for historically marginalized and disenfranchised communities, over 20 states, primarily Republican red, have increasingly placed voting impediments in the paths of primarily poor people, people of color, people with disabilities, young people, and elders.

So, Mr. Ryan, how do these voter suppression measures “appeal to people’s highest ideals?”

I would also ask, how did you, Paul, respond to Governor Robert Bentley when he said on the day he was sworn in on January 2011:

“So anybody here today who has not accepted Jesus Christ as their savior, I’m telling you, you’re not my brother and you’re not my sister, and I want to be your brother.”

Paul, did you contact Bentley and condemn him for “preying” (“praying,” pun intended) “on people’s prejudices?”

What about former Senate Republican Majority Leader, Trent Lott, who, in 1998 proclaimed on the Senate floor about homosexuality:

“It is [a sin]….You should try to show them a way to deal with that problem, just like alcohol…or sex addiction…or kleptomaniacs.”

In fact, in a number of your Party’s presidential platforms, you have consistently opposed equality for LGBT people. For example, according to your 2012 platform, under the heading “Preserving and Protecting Traditional Marriage,” can you ever comprehend the utter paradox (disconnect) between the first and the second sentences?:

“…[W]e believe that marriage, the union of one man and one woman must be upheld as the national standard, a goal to stand for, encourage, and promote through laws governing marriage. We embrace the principle that all Americans should be treated with respect and dignity.”

How “respectful” is this and how does this maintain the dignity of those truly believing in “equal treatment under the law?”

So Mr. Ryan, in this very brief outline, I ask how you can merely condemn Mr. Trump for his statements and actions while overlooking the atrocities your Party has perpetrated throughout its past to the present day? I would never claim that the Democratic Party “does not prey on people’s prejudices” or that it appeals to people’s “highest ideals,” because this simply is not true.

Oh, I almost forgot, what is your assessment of former Republican Wisconsin Senator Joseph McCarthy? I’m sure you’ve at least heard of him since he was from your home state. Do you believe he did not “prey on people’s prejudices?” And how many Republicans were among the inquisitors on the House Un-American Activities Committee?

I think, in fact, it’s time for you to take some more U.S. history courses before you attempt to compile another inadequate budget proposal ahead of your eventual run for the presidency. It always adds such a nice touch when our leaders know their history.