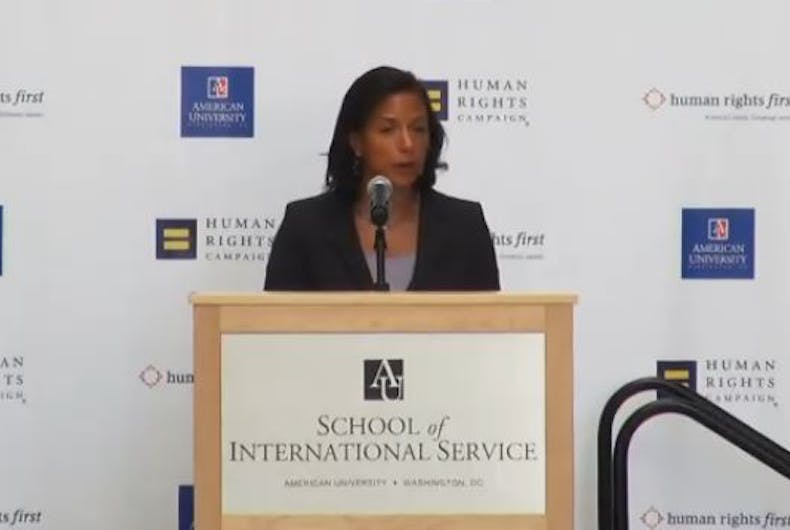 The event, hosted by the school, the Human Rights Campaign and Human Rights First, included a moderated discussion with James Goldgeier, Dean of American University School of International Service.

Rice recalled fighting for the release of members of the LGBTQ community in Uganda after a Pride Week event was raided by police in August. She said that while she is aware not every case of civil rights abuses are within their power to rectify, when cases of abuse from “a far-away country can be heard at the highest levels of the U.S. government, that itself is progress.”

Rice noted, “we still have a great deal of work to do.”

She also made the pragmatic case for increasing the rights of the LGBTQ community around the world:

Whether we are talking about race, religion, sexual orientation or gender identity, this fight for equal rights is what our history and values demand. It is also profoundly in our interests. If we reduce the disparities that can lead to instability and violence, we increase our shared security. Countries do better—across every metric—when they tap the talents of all their people. A 2014 USAID study estimates that expanding rights for a country’s LGBT population is associated with an increase in GDP. So, advancing equality is both morally right and strategically smart.

Rice noted the progress made under President Obama in the fight for LGBTQ rights in the United States:

Just eight years ago, when President Obama took office, the federal government treated violent crimes motivated by anti-LGBT bias the same as any other. Today, law enforcement has the tools to prosecute these heinous acts as what they are—hate crimes. Eight years ago, LGBT service members had to hide who they loved to serve the country they loved. Today, as President Obama said, “Don’t Ask, Don’t Tell don’t exist no more.” The Secretary of the Army is a proud gay man. And, transgender Americans can now serve openly. Eight years ago, same-sex marriage was legal in just two states. Today—thanks to many people in this room—DOMA is history, and marriage equality is the law of the land in all 50 states. That Friday night of the landmark Supreme Court ruling, my husband I took a photo together that we cherish, outside of the White House lit up in the colors of the rainbow to celebrate what we’ve always known—that love is love is love.

Watch Rice make her moving remarks in the video below, followed by the moderated portion of the evening.