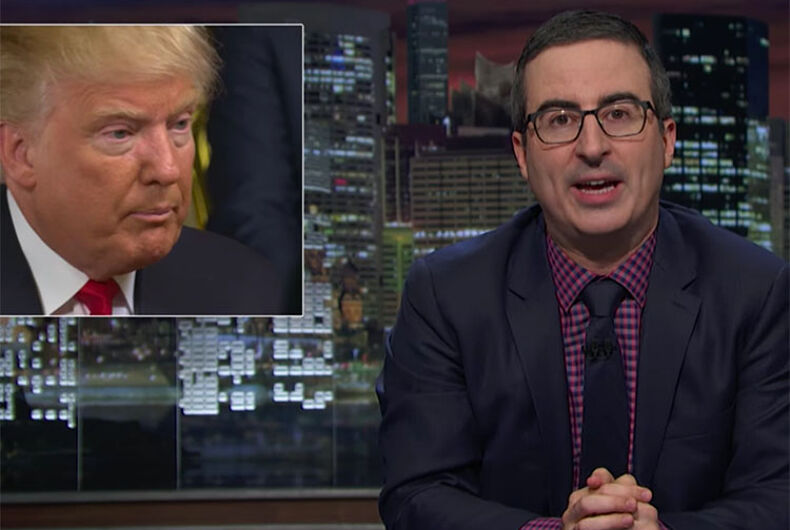 John Oliver devoted almost the entire final episode of this season’s Last Week Tonight to the election of Donald Trump.

“It’s important to remember many people are happy to see him in office. Some are voters who think he’ll bring jobs back and shake up Washington. Others are happy simply because he’s not Hillary Clinton. And others of course are Vladimir Putin and Scott Baio. But for the rest of us, we are faced with the same questions as a guy that woke up the day after a Vegas bachelor party, deep in the desert, naked, tied to a cactus and a dead clown. Namely, how the fuck did we get here? And what the fuck do we do now?”

He made it clear his mission is to convince viewers upset and angered at his looming presidency to not move to Canada, but to rebel.

“We’re gonna need to stay here and fight,” Oliver told viewers, “and not just politically in four years when he’s up for reelection, but constantly—monitoring legislation as it moves through Congress and fucking voting when your legislators come up for reelection in two years.”

Read “Why we can’t trust that lying liar Donald Trump on marriage (or anything)” by clicking here.

Oliver suggested viewers support non-profit causes including the Trevor Project as other examples of how to fight against Trump’s policies.

“It is going to be too easy for things to start feeling normal—especially if you are someone who is not directly impacted by his actions—so keep reminding yourself: This is not normal. Write it on a Post-It note and stick it on your refrigerator. Hire a skywriter once a month. Tattoo it on your ass, because a Klan-backed misogynist internet troll is going to be delivering the next State of the Union address, and that is not normal. It is FUCKED UP.”

Going against the trend by media personalities to say, “give Donald Trump a chance,” the British-born comic declared the president-elect “abnormal” and not worthy of such optimism.

“Donald Trump will be president, and respecting democracy means accepting that—although there is one sentiment that I would argue takes that a little too far,” and that is the idea Americans should “give Donald Trump a chance.”

“Optimism is nice if you can swing it, but you’ve got to be careful, because it can feed into the normalization of Donald Trump. And he’s not normal. He’s abnormal. He is a human ‘what is wrong with this picture?’ He sticks out like a sore thumb—and frankly, he even looks like a sore thumb. So giving him a chance in the sense of not speaking out immediately against policies he’s proposed is dangerous.”

“Trump is like a Magic 8-Ball, every time you shake him he gives you a different answer,” Oliver said.

Watch the episode of HBO’s Last Week Tonight, below, via YouTube: