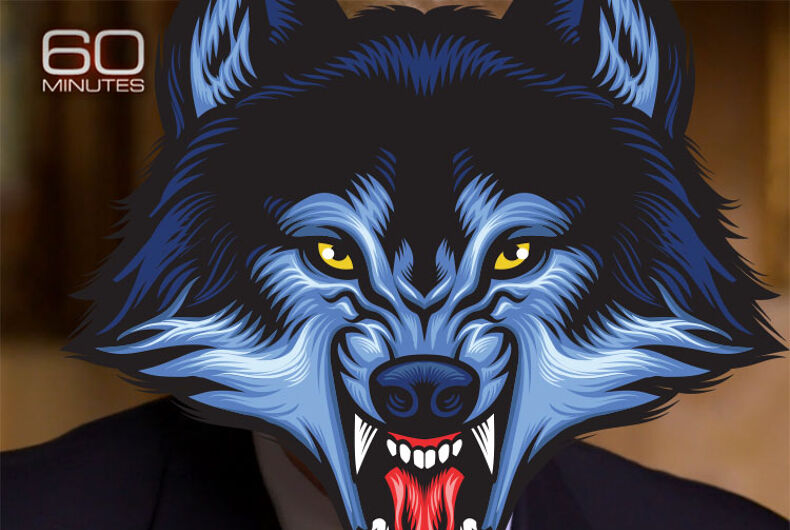 So did anyone besides me notice the granny disguise the president-elect was wearing, along with his carefully-coiffed hairdo?

“Grandmother, what if you appoint a judge…” Red tried to ask, but was cut-off. Trump “wolfsplained” it to her.

“It’s irrelevant because it was already settled. It’s law. It was settled in the Supreme Court. I mean it’s done,” said the wolf, reassuring Red.

The next thing she should said was, “Grandmother, what big teeth you have!” But given Trump’s record on telling the truth, no one really expects him to truthfully admit the answer is, “All the better to eat you with!”

Because president-elect Donald Trump has not consistently addressed this question of supporting LGBTQ rights including marriage, and the record shows he and his cronies have in fact already pledged to do what they can to overturn them.

It should be noted that legal eagle Shannon Minter, the legal director of the National Center for Lesbian Rights, has already repudiated the possibility of Trump overturning Obergefell v. Hodges, saying “There are only two ways for a SCOTUS ruling to change. 1) the court reverses itself, or 2) a constitutional amendment. Neither are likely anytime soon.” You can read more about that here.

But that does not mean Minter or anyone else in LGBTQ advocacy believes President Trump won’t try to find a way around that decision, and is going to attempt to roll back our rights, especially people like Minter and myself, who are transgender.

“In a very real sense, our lives, our ability to work, to attend school, to obtain health care, are at the mercy of a new administration,” Minter told Reuters last week.

Trump has been all over the map on marriage equality. Earlier this year, Trump told FOX News that he’d “strongly consider” overturning same-sex marriage, and in February he urged evangelical leaders to “trust” him to protect “traditional marriage.”

Then Trump flip-flopped while talking to a lesbian journalist, stating that he’d “move forward on LGBT rights.” The Log Cabin Republicans produced a video demanding he say where he stands one and for all.

Writing in his blog, Peacock Panache, Tim Peacock is among those eloquently calling out Trump as a liar today:

“Besides the fact that an entire swath of the population would find his dismissal of the concept as ‘irrelevant’ pretty offensive, Trump has given no indication that he’s telling the truth when he says that. Moreover, history tells us Trump lies when it’s politically expedient.

“Earlier in the interview, in fact, Trump literally blamed the fear many Americans are experiencing in the wake of last Tuesday on the press (rather than the hundreds of documented cases of hate, harassment and violence that have spiked across the nation).

“‘I want to ask you about something that’s going on right now around the country. A lot of people are afraid. They’re really afraid. African-Americans think there’s a target on their back. Muslims are terrified,’ Stahl said to Trump.

“‘I think it’s built up by the press,’ Trump responded. ‘Frankly, they’ll take every single little incident that they can find in this country…and they’ll make into an event because that’s the way the press is.’

“When Stahl segued into treatment of LGBTQ people with that question, Trump quickly interrupted her saying, ‘I mentioned them at the Republican National Convention!’

“What he actually said at the RNC, for the record, is that he opposes the murder of LGBTQ people. He said:

‘Only weeks ago, in Orlando, Florida, 49 wonderful Americans were savagely murdered by an Islamic terrorist. This time, the terrorist targeted the LGBTQ community. No good, and we’re going to stop it. As your president, I will do everything in my power to protect our LGBTQ citizens from the violence and oppression of a hateful foreign ideology. Believe me.’”

Can we believe him? Really?