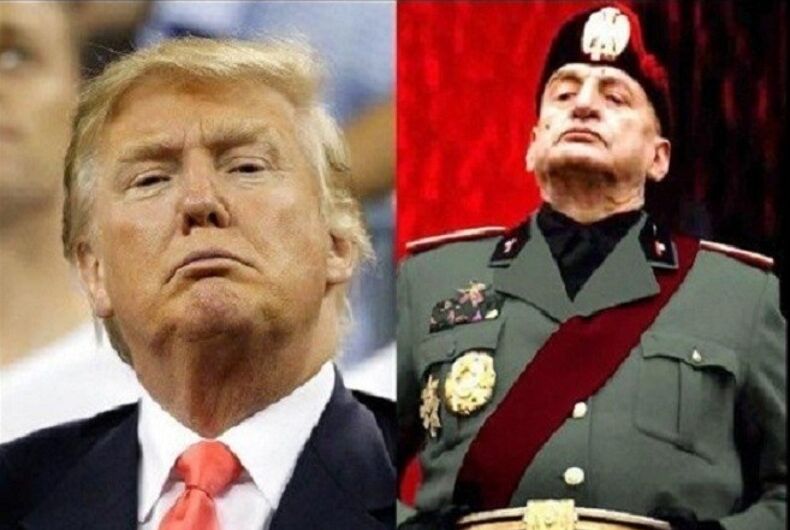 While not an elected leader per se, though influential nonetheless, Galeazzo Ciano (pronounced “Chano”), was tapped by Italian Fascist dictator Benito Mussolini as his chief propagandist and foreign minister from 1936 until 1943.

Ciano was born into wealth and privilege in Livorno, Italy in 1903. His father, Costanzo Ciano, owned vast tracts of real estate, and a successful newspaper, all which he shared with his son. In addition, the elder Ciano served as an Admiral recognized as a hero in WWI in the Royal Italian Navy. He assisted in the reorganization of the Italian merchant navy soon following the war, and served as a founding member of the National Fascist Party.

Both father and son joined Mussolini’s 1922 march on Rome before the soon-to-be Il Duce’s installation as Prime Minister.

Some of the elder Ciano’s “service” to the nation centered on exploitation on a massive scale, and even on fraud. He used his great influence in finances and on the stock market to ruthlessly degrade the stock of certain companies, after which he purchased controlling interests. The value of the stock then rose, and he substantially increased his profits.

Lacking anti-nepotism statutes in Italy, Mussolini appointed Galeazzo Ciano as Italian consul in Shanghai, and in 1935, chose him as minister of press and propaganda. He joined the army and volunteered in the Italian incursion into Ethiopia (1935-1936), returning as a war hero as did his father earlier. The younger Ciano then resumed his ministerial rank and duties under Mussolini.

Also while not an elected office, Jared Kushner was chosen by Donald J. Trump to serve as one of his chief campaign advisors and strategists on Trump’s run for the presidency. At age 28, Kushner married Trump’s eldest daughter, Ivanka Trump, at Trump’s National Golf Club in Bedminster, New Jersey.

Born in 1981 to wealth and privilege and sent to prestigious schools, Jared Kushner joined his father, Charles Kushner’s, highly profitable real estate empire. Following his father’s conviction and incarceration for tax evasion, witness tampering, and illegal campaign donations, the younger Kushner purchased a newspaper, the New York Observer, in 2006, and helped to inaugurate Cadre, an online marketplace for large real estate buys. Following a brief downturn in the housing marking resulting in substantial losses, he regained his footing and again increased his wealth substantially.

Over the past summer, Kushner consolidated and directed Trump’s data management efforts by connecting fundraising and campaign messaging. Unlike his bombastic and unedited father-in-law, Kushner’s understated personal style as someone who avoids the glare of the spotlight seems to function as a somewhat moderating and grounding influence on the President-elect.

He has won Trump’s trust and has gently moved into the older man’s inner circle of top political advisors. This was clearly apparent when Kushner was seen walking around the White House with President Obama’s Chief of Staff as Trump met with the President in the Oval Office shortly following the campaign.

While anti-nepotism laws prevent Kushner from working in the Trump White House in an official paid capacity, the President-elect announced that he would like to send his son-in-law to the Middle East, and especially to Israel since he was raised as an Orthodox Jew whose grandparents were Holocaust survivors and emigrated to the U.S. following World War II. Trump proposed appointing Kushner, who does not have actual diplomatic experience, as special envoy to negotiate a peace settlement between Israelis and Palestinians.

Back in Italy, Mussolini decided to side with Germany and enter the conflict by declaring war on France in 1940. Ciano attempted to act as a moderating voice in Mussolini’s ear by warning the Italian leader that their military was completely ill-equipped for any serious and possibly prolonged war effort. Ciano attempted to serve as a voice of reason throughout Italy’s doomed involvement.

His truculent and arrogant father-in-law dismissed the younger man’s concerns by assuring him of the army’s readiness for what he predicted would amount to a swift and relatively easy victory.

“Single-mindedness is the virtue of fools,” Ciano later wrote in his diary. In fact, Mussolini became a German puppet once he decided to enter the war.