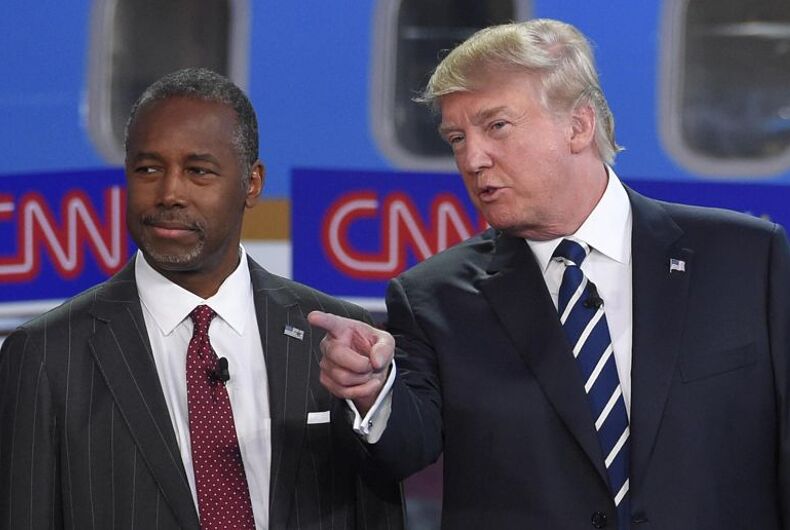 This story has been updated to reflect the report that Carson has accepted.

Failed presidential candidate Ben Carson has reportedly accepted the job of secretary of the Department of Housing and Urban Development (HUD), according to the the Wall Street Journal.

The announcement came not from Carson or Trump but from Carson’s controversial confidante, Armstrong Williams, according to the newspaper.

Carson is a retired neurosurgeon who, like Trump, has never held public office. He ran during the 2016 Republican primary and became a Trump supporter after exiting the race. He has been loyal ever since, including through the “Access Hollywood” tape and subsequent sexual assault allegations against Trump.

Although Carson himself has not yet officially announced he has accepted the job, he suggested via social media on Wednesday that there was an announcement forthcoming about his “role in helping to make America great again.”

An announcement is forthcoming about my role in helping to make America great again. https://t.co/jGRyzFRBAK

Carson had been rumored to be the favored candidate for the secretary of Health and Human Services (HHS), but his business manager and close confidant Armstrong Williams shot those down.

“Dr. Carson was never offered a specific position, but everything was open to him,” Williams told The Hill in a phone call.  “Dr. Carson feels he has no government experience, he’s never run a federal agency. The last thing he would want to do was take a position that could cripple the presidency.”

@RealDonaldTrump is considering @RealBenCarson for a cabinet post. Dr. Carson is prayerfully & seriously considering. How humbling!

Williams has since tweeted out that Carson was “prayerfully and seriously considering” a cabinet position, which Carson has retweeted.

His experience would be more in line with that position than as secretary of HUD, since he has no previous experience in the realm of housing and development.

Carson has called LGBTQ protections “extra rights” for “a few people who perhaps are abnormal.” He has also claimed that same-sex marriage will lead to mass killings and chaos, despite it having yet to produce such results.

Trump has also named Sen. Jeff Sessions, who never saw a piece of LGBTQ rights legislation he didn’t want to vote down, and Steve Bannon, who has called progressive women “a bunch of dykes,” to his cabinet, as Attorney General and campaign strategist respectively.

Sessions history of racist statements and questionable remarks concerning the KKK and Bannon’s history of running race-baiting Breitbart, a favorite among white nationalists, have raised concerns as well.