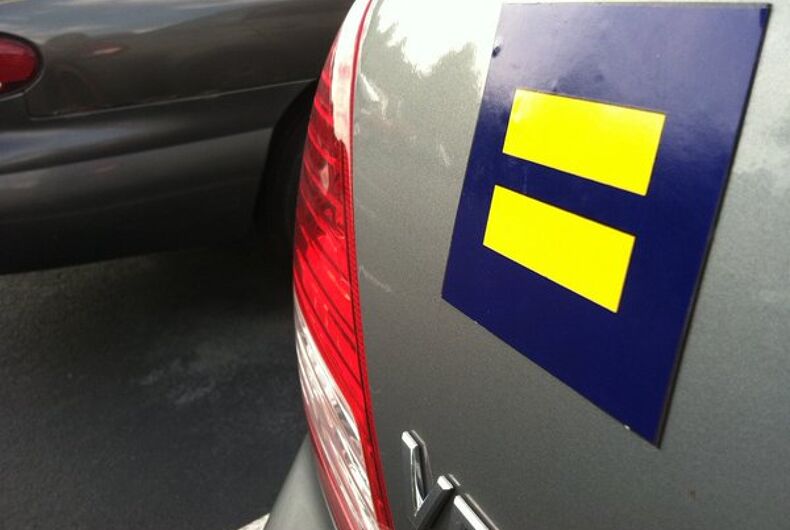 A straight ally took a stand against her homophobic parents this Thanksgiving by refusing to remove the Human Rights Campaign equality sticker from her car for her visit home.

She received a text message from her father as she prepared for the holiday weekend, which informed her that she could either remove the sticker from her car or have transportation provided to her by a family member, saying they found the emblem “offensive.”

While she initially decided to cover the sticker with an index card in an effort to avoid an argument, her post received thousands of comments, which offered support but also pushed her to rethink her plan.

The supporter shared her story on the pro-Clinton Facebook group Pantsuit Nation, which was picked up and published on the HRC blog, where she is referred to only as Rachel.

“Ultimately, Rachel realized that removing the sticker was allowing discrimination to win, and she refused to back down from something she so strongly believed in. Unwilling to compromise her convictions, Rachel decided to leave the sticker on her car,” they report.

“Thank you for the outpouring of support and suggestions through comments and private messages,” she wrote. “I truly did not anticipate this response. It’s comforting to know I’m not alone in this battle.”

“Many of your comments have brought me to the realization that covering the sticker would be equivalent to removing it,” she continued. “I am an ally at all times, not just when it is convenient or easy. My father would win by forcing me to back down from something that I believe in, and it would validate his belief that he still has control over me and can bully me into submission. So there will be no compromise, as I am not willing to compromise my convictions anymore than he is willing to compromise his. I have decided that I will be parking elsewhere and walking to their house, even though that will be a good little hike since they live down a country road in the middle of nowhere. I feel that this will send a far stronger message than if I were to refuse to remove the sticker and just cover it instead.”

What do you think of her decision? How would you have handled it? Let us know in the comments below.