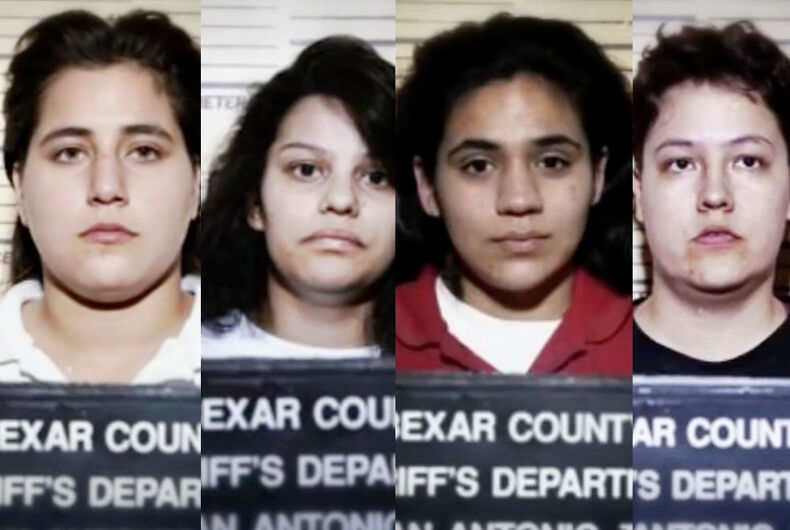 One day before Thanksgiving, four lesbian women known as the “San Antonio Four” — who were wrongly convicted of sexually abusing young children in their care nearly two decades ago — were declared innocent by the Texas Court of Criminal Appeals.

“Those defendants have won the right to proclaim to the citizens of Texas that they did not commit a crime,” Judge David Newell ruled.

“These women have carried that burden. They are innocent. And they are exonerated.”

In 1997, Elizabeth Ramirez, Kristie Mayhugh, Cassandra Rivera and Anna Vasquez were found guilty of sexually assaulting Ramirez’s nieces, who were staying with her and her friends for a week.

As NewNowNext reported, the 7 and 9-year-old girls testified the women tied them up and sexually abused them, then threatened to hurt them if they told anyone.

Rivera was paroled in 2012 and the other three were released on bail in 2013 when new evidence came to light. But it took three more years for the court to clear all four.

“I still can’t grasp the fact of just being free, finally, after all this time,” Ramirez told KSAT-TV.

A documentary titled Southwest of Salem tells the story of the women’s ordeal, and played an important role in getting their names cleared.

As the documentary about the San Antonio Four shows, they were railroaded during a time in the 1980s and ’90s in which America obsessed about a “satanic panic,” what the website called “a veritable witch hunt with hundreds of babysitters, preschool teachers and other caregivers being wrongfully accused of horrific crimes against children.”

Watch a trailer for Southwest of Salem, below: