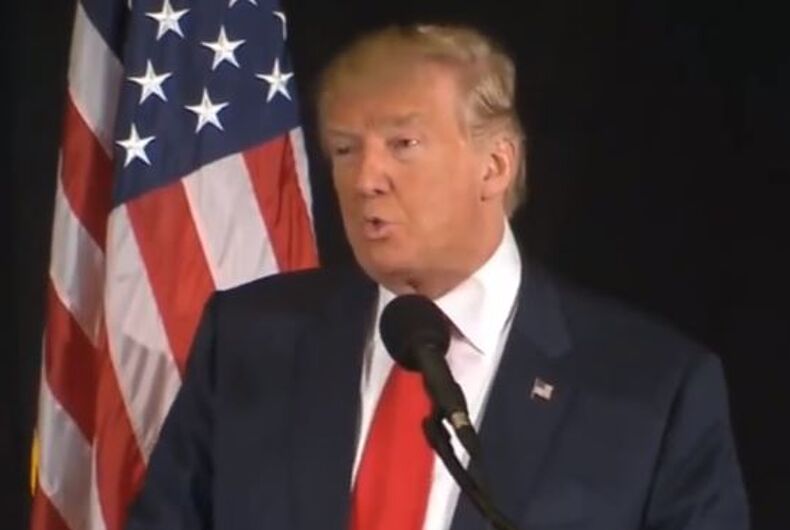 Donald Trump complained about what he called the “political correct military” when asked about the service of women and transgender people during a campaign stop today in Herndon, Virginia.

After delivering a brief speech on cyber security to the newly formed group Retired American Warriors PAC, Trump, who was accompanied by conservative Christian leaders Tony Perkins and Jerry Boykin, took questions from the audience.

A man argued that the military was being undermined by the “forces of political correctness” and that it has “become an institution for social experiment.”

“As a result, the military has undergone a number of changes to regulations with regard to women in combat, transgender rights and other issues,” the man continued. “None of these PC actions were combat effective or readiness driven.” He asked what Trump would do in response to these changes.

“We’re going to get away from political correctness,” Trump answered to applause. “We’re gonna have to do that.”

He went on to say that he would defer to “the generals, the admirals, the people on top” as it concerns particular policies regarding women and transgender soldiers.

“Allowing transgender people to serve their country isn’t about politics, it’s about extending them the respect and dignity every service member deserves. This is yet another example of the grave threat that Donald Trump and Mike Pence pose to LGBTQ Americans,” said HRC Communications Director Jay Brown in a statement. “Working for years with senior members of the military, the Secretary of Defense rightly ended a discriminatory policy this year, bringing long-overdue recognition to transgender service members, strengthening our military and our nation. Just like Mike Pence’s record defending the discriminatory, ‘Don’t Ask, Don’t Tell,’ Donald Trump’s comments today are a reminder that he puts at risk all the gains made by the LGBTQ community over the last eight years.”

They also point out that 18 other nations in addition to the U.S., including the United Kingdom, Australia, Canada, and Israel, already allow transgender people to serve openly in their militaries.

Trump also drew headlines for what he said about post-traumatic stress disorder (PTSD).

“When you talk about the mental health problems, when people come back from war and combat and they see things that maybe a lot of the folks in the room have seen many times over and you’re strong and you can handle it, but a lot of people can’t handle it,” he said, which many are calling insensitive to those suffering from PTSD.

Watch Trump’s comments on women and transgender soldiers below.