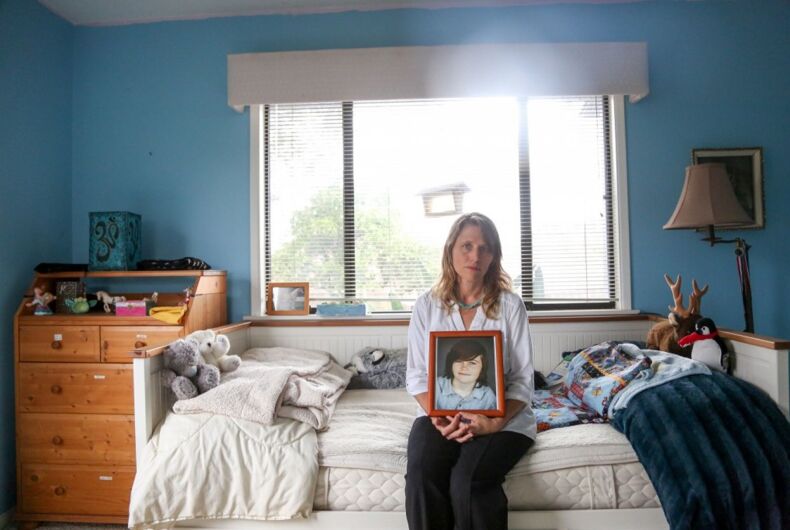 The mother of a transgender boy is suing the hospital that treated him for “suicidal ideation,” just weeks before he took his life, alleging staff repeatedly called him a girl.

Katharine Prescott took her son, Kyler, 14, to the emergency room at Rady Children’s Hospital-San Diego, which has a Gender Management Clinic to treat children with gender dysphoria and related issues. He was placed in the hospital’s youth psychiatry unit for a 72-hour suicide hold.

“In that moment, he was in crisis,” Prescott told The Washington Post.

She says hospital staff kept referring to Kyler as a girl, sending him “into a spiral.”

“He was frantic. They were making him worse. They were completely traumatizing him,” she said.

Prescott said she doesn’t blame the hospital for his death, but that she wants to hold them accountable in an effort to “make sure that doesn’t happen to other kids.”

To that end, she filed a civil lawsuit on Monday claiming that medical personnel violated federal and state laws that protect against discrimination.

“It’s painful to speak out, but I want to make sure no other parent or child ever has to go through this again,” she said in a statement.

Rady Children’s officials told The Washington Post their “top priority is providing the absolute highest level of care to our patients and families. While it is the policy of Rady Children’s not to comment on pending legal matters, any allegations of wrongdoing, including discrimination, are investigated thoroughly and followed up on.”

“RCHSD staff assured Katharine that all staff would refer to Kyler with male gender pronouns and would otherwise treat him as a boy,” according to court documents. However, that was not the case, the suit argues, claiming staff continued to refer to Kyler by female pronouns and blocked his mother’s number after she called them “multiple times” to complain to them about the situation.

“Honey, I would call you a ‘he,’ but you’re such a pretty girl,” one employee said, the lawsuit claims.

One of Prescott’s attorneys, Alison Pennington of the Transgender Law Center, told NBC News that the civil suit may be the first case involving a transgender child that claims sex-based discrimination under the Affordable Care Act.

Kyler came out to his mom at 13, and the year before began engaging in self-harming behaviors.

Katharine appeared on “I Am Cait,” last year, after Kyler’s suicide, speaking with Caitlyn Jenner about her son’s struggles.

Trump speaks out against transgender and female soldiers in ‘PC military’

How does Tim Kaine’s religion influence his positions on LGBT rights?