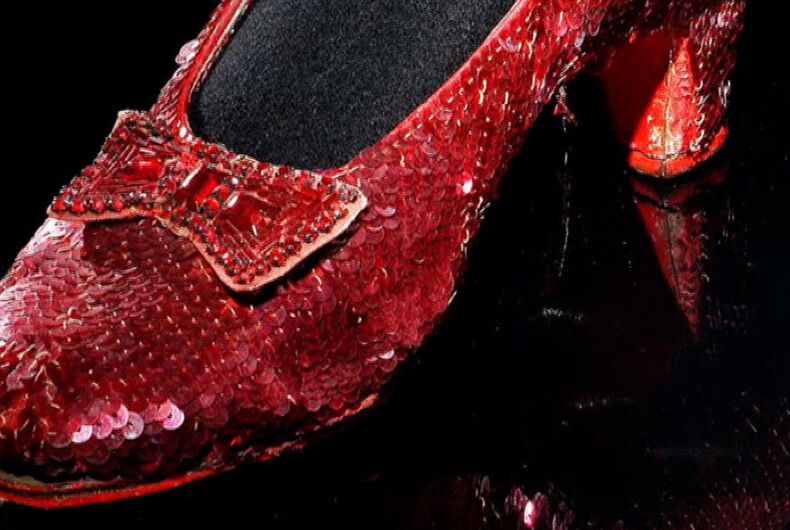 Close up of one of Dorothy's ruby slippersPhoto: Smithsonian

Dorothy’s ruby slippers from The Wizard of Oz may be one of the most popular exhibits at the Smithsonian’s National Museum of American History, but, sadly, they’re falling into disrepair. To help pay for restoration costs, the museum has created a Kickstarter to raise the estimated cost of $300,000.

“The Smithsonian is a federal trust, so we get a generous appropriation every year to keep the lights on and pay the salaries here. But for exhibitions and projects like this, we require outside funding,” curator Ryan Lintelman told Washington news station WTOP. “So since these slippers belong to the American people, we’re asking them to help us make sure that they’ll last for generations to come.”

The museum acquired the slippers from an anonymous donor in 1979 and were put on immediate display. Unfortunately, the lack of preservation before they landed at the Smithsonian has taken its toll.

“The ruby slippers were made just to last through the filming of ‘The Wizard of Oz,’ and after 80 years, we all start to show our age,” Lintelman said. “They’ve suffered from exposure to light and changes in humidity and temperature and just old age. There are some threads fraying, sequins are starting to fall off,” he said.

Once the project gets started conservations will clean, repair, and sterilize the shoes and build a custom state-of-the-art display case.

While several pairs of the shoes were made for the movie, these are the only pair on display at a public museum. The slippers are actually created from shoes that were commercially available at the time and dyed red while mesh with sequins on it was attached to the shoe.

Dorothy’s slippers will remain on display at the museum until after the presidential inaguaration. The Kickstarter will end on November 16, so throw your pennies in the pot now (unless, like the Tin Man, you lack a heart).

Cultural appropriation does not make David Bowie an LGBT icon