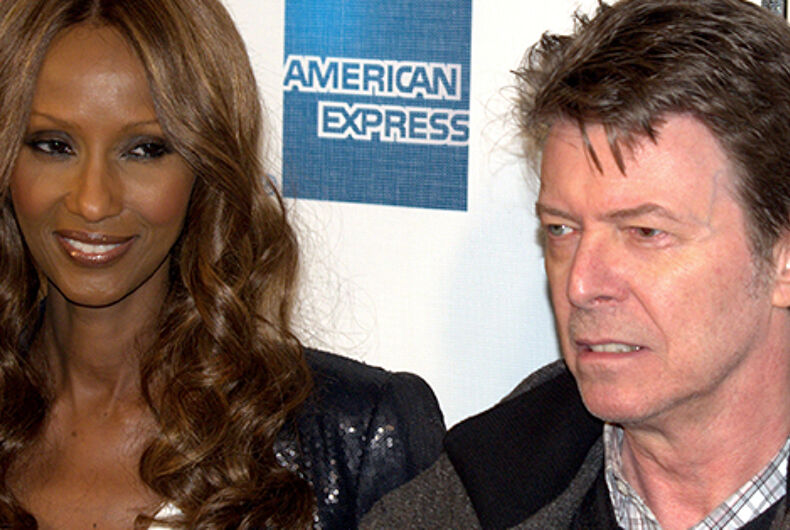 October is LGBT History Month and Equality Forum is honoring an icon a day all month long, including David Bowie, who was honored October 7, despite the fact that he would probably look askance at such a title.

David Bowie played with identity throughout his career, trying on different persona and presentations as regularly as he changed up his musical styles. This included his sexuality.

Bowie came out as gay in an interview with Melody Maker in 1972 with writer Michael Watts, saying, “I’m gay, and always have been, even when I was David Jones.” He was married to first wife Angie Barnett at the time. The article’s author, Michael Watts, suggests his coming out might be less than genuine.

“But there’s a sly jollity about how he says it, a secret smile at the corners of his mouth,” notes Watts. “He knows that in these times it’s permissible to act like a male tart, and that to shock and outrage, which pop has always striven to do throughout it’s history, is a ballsbreaking process. And if he’s not an outrage, he is, at the least, an amusement. The expression of his sexual ambivalence establishes a fascinating game: is he, or isn’t he? In a period of conflicting sexual identity he shrewdly exploits the confusion surrounding the male and female roles.”

“Let’s start with the one question you’ve always seemed to hedge: How much of your bisexuality is fact and how much is gimmick?” Playboy asked four years later.

“It’s true – I am a bisexual. But I can’t deny that I’ve used that fact very well. I suppose it’s the best thing that ever happened to me. Fun, too. We’ll talk all about it,” he answered.

But then in 1983, at the onset of the AIDS epidemic “playing queer” was no longer so much fun, it seems, as Bowie took the opportunity to come out as straight to Rolling Stone in an interview with Kurt Loder.

“The biggest mistake I ever made,” he told Loder, “was telling that Melody Maker writer that I was bisexual. Christ, I was so young then. I was experimenting….”

“I think I was always a closet heterosexual,” he said in another Rolling Stone interview in 1993. “I didn’t ever feel that I was a real bisexual. It was like I was making all the moves, down to the situation of actually trying it out with some guys […] I wanted to imbue Ziggy with real flesh and blood and muscle, and it was imperative that I find Ziggy and be him. The irony of it was that I was not gay. I was physical about it, but frankly it wasn’t enjoyable. It was almost like I was testing myself. It wasn’t something I was comfortable with at all. But it had to be done.”

“But for me, I was more magnetized by the whole gay scene, which was underground,” he continued. “Remember, in the early 1970s it was still virtually taboo. There might have been free love, but it was heterosexual love. I like this twilight world. I like the idea of these clubs and these people and everything about it being something that nobody knew anything about. So it attracted me like crazy. It was like another world that I really wanted to buy into. So I made efforts to go and get into it. That phase lasted up to about 1974. It more or less died with Ziggy.”

What he is explaining here is a subcultural appropriation. It played well and was edgy and then when it no longer suited him he dropped it, and henceforth seemed to wish everyone would get a case of collective amnesia that it had ever happened.

He was clearly uncomfortable with answering the question about his years playing with his sexual identity in subsequent years, as is evident in the video below where he is asked about it by Jonathan Ross and seems to wish the topic hadn’t been broached.

Bowie appears to have been, at most, questioning or experimental at one point in his life, which is a natural part of self-discovery and in and of itself is fine, however should we really be honoring him as an LGBTQ icon when he himself seems to have run from the gay and bi label so adamantly for most of his adult life?

While it may be tempting to claim as our own cultural and artistic heroes such as Bowie, especially the year following his death, but it comes with a cost. It seems to invalidate someone like David Bowie’s true identity and calls into question why we aren’t honoring individuals who proudly identified as a member of the LGBTQ community.

While Equality Forum’s bio for Bowie, on their LGBT History Month website, does allude to some of this nuance, writing, “In 1993 he told Rolling Stone magazine that declaring his bisexuality was ‘the biggest mistake’ he ever made. He would later say he had ‘no problem with people knowing I was bisexual. But I had no inclination to hold any banners nor be a representative of any group of people.'”

This quote comes from a 2002 interview with Blender, and the full quote reads:

I don’t think it was a mistake in Europe, but it was a lot tougher in America. I had no problem with people knowing I was bisexual. But I had no inclination to hold any banners or be a representative of any group of people. I knew what I wanted to be, which was a songwriter and a performer, and I felt that bisexuality became my headline over here for so long. America is a very puritanical place, and I think it stood in the way of so much I wanted to do.

Taken in context, you can see that he is referring to not caring about people knowing he was bisexual at the time that he was claiming to be so. Notice how Equality Forum’s wording makes it seem as if he was speaking in the present tense at the time of the statement, when he clearly was not.

But considering he worked so hard to distance himself from the label, it seems unusual to attach it to him again in death.

David Bowie will always be remembered as a great songwriter and performer, but as far as LGBT icons go, well, keep looking.