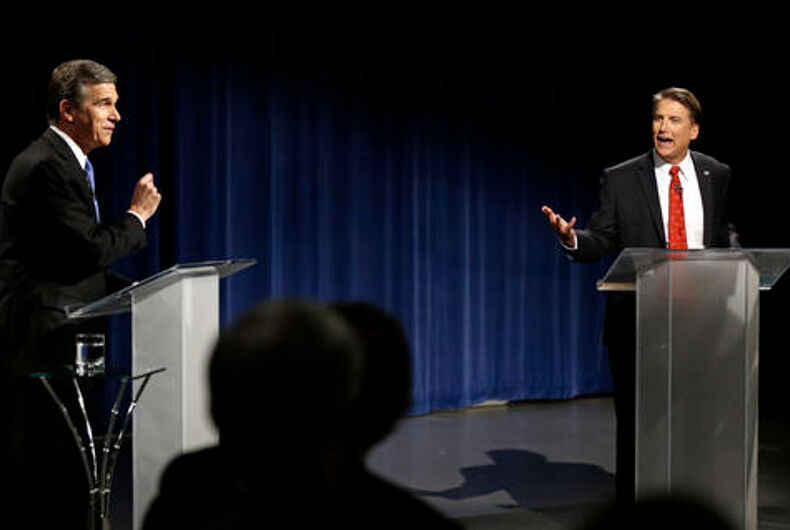 McCrory also declined to withdraw his support for GOP presidential nominee Donald Trump for crude comments about women. Though Trump “needs to have his mouth washed out with soap,” McCrory said, so does Democratic nominee Hillary Clinton “because teachers always said, ‘Don’t tell a lie.'” He cited Clinton’s troubles with private emails and the Benghazi attacks at the U.S. embassy in Libya.

“We’ve got some character issues among the presidential candidates, but I’m voting for the candidates that best represent my viewpoints,” McCrory said. When asked by moderator Chuck Todd of NBC News whether Trump should be a role model for kids, McCrory responded no for “his vulgar verbal outbursts” but praised him for taking a strong stand on issues such as the threat of Syrian refugees coming into the U.S.

Cooper, the sitting attorney general, blasted McCrory, who has spoken at a couple of Trump rallies in the presidential battleground state. Trump’s showing in North Carolina could affect the governor’s race, in which Cooper, McCrory and their allies have spent $19 million on broadcast television commercials as of last week. National Democrats see McCrory as their best chance to pick off a Republican governor this fall.

“It’s hard to believe that Gov. McCrory continues to support a presidential candidate who condones sexual assault” and demeans women, Cooper said at the University of North Carolina Television studios. “Gov. McCrory and Donald Trump are a lot alike — they both have trouble with the facts and they both engage in divisive rhetoric.”

That rhetoric, according to Cooper, extends to McCrory for the law known as House Bill 2, which McCrory and the GOP-led legislature approved last March. The law limits local and state governments in expanding anti-discrimination rules on the basis of sexual orientation and gender identity. It also requires transgender people to use bathrooms in schools and government buildings that correspond to the gender on their birth certificate.

Cooper and other Democrats have capitalized on the law’s condemnation nationally by gay-rights groups, corporate executives and entertainers from Bruce Springsteen to Pearl Jam. The NBA moved next year’s All-Star Game out of Charlotte because of the law. Some business expansion projects have been canceled. The NCAA and Atlantic Coast Conference last month pulled several championship events from the state.

“The thing that’s embarrassing is that a very liberal mayor with very strong support from a very liberal attorney general started this whole bathroom mess,” McCrory said. But Cooper said the governor’s blaming everyone but himself and the law needs to be repealed.

McCrory has “continued to go across this state and say this is not hurting our economy … and says that everything is going fine. Gov. McCrory, what planet are you on?” Cooper asked.

When asked by Todd which bathroom transgender woman Caitlyn Jenner should be allowed to use in Charlotte, McCrory said Jenner should use any bathroom the private sector allows Jenner to use. But at a public university facility, he said, “she’s going to use the men’s shower.” Asked the same question, Cooper avoided a direct answer, saying instead that local governments should be trusted to make decisions on such issues.

The debate was overshadowed in parts of North Carolina by the aftermath of Hurricane Matthew, which has left hundreds of thousands of people still without power. Thousands of residents along cresting rivers in eastern North Carolina have been ordered to evacuate. The two clashed over anticipated funding needed for the recovery.

McCrory highlighted the nearly $1.6 billion in the state’s reserves and that Cooper have raised concerns about the Republicans’ focus on building them up so high. Cooper criticized McCrory for signing a law that would use $500,000 from a disaster recovery fund to help the governor with House Bill 2’s legal fees. McCrory has said he wouldn’t use those funds in that manner.