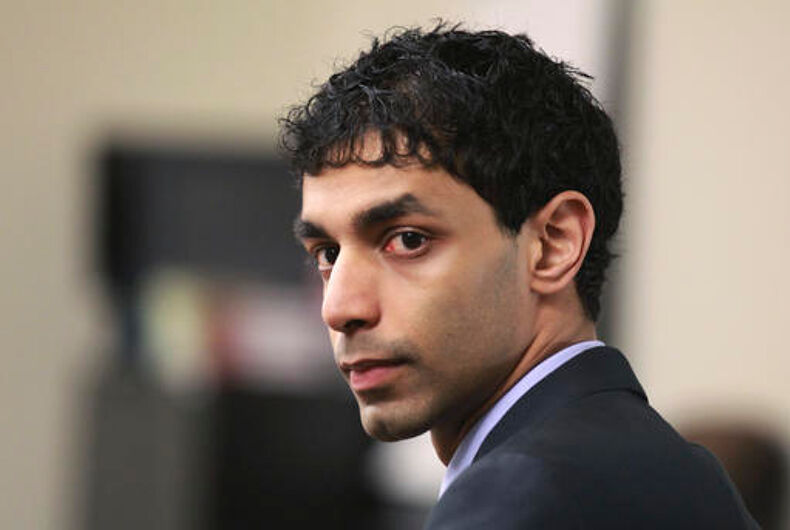 FILE – In this March 2, 2012, file photo, Dharun Ravi waits for his trial to begin at the Middlesex County Courthouse in New Brunswick, N.J. Ravi, a former Rutgers University student, whose roommate Tyler Clementi killed himself in 2010 after being captured on a webcam kissing another man, pleaded guilty Thursday, Oct. 27, 2016, to attempted invasion of privacy, and was sentenced to probation and 30 days time served. Photo: John Munson/The Star-Ledger via AP, Pool, File

NEW BRUNSWICK, N.J. (AP) — A former Rutgers University student whose roommate killed himself after being secretly recorded on a web camera kissing another man pleaded guilty Thursday to attempted invasion of privacy.

Dharun Ravi’s plea comes after a New Jersey appeals court last month threw out a 15-count conviction against him and ordered a new trial on other counts.

The case stemmed from the 2010 death of 18-year-old Tyler Clementi, a freshman in his first weeks at Rutgers when he jumped off the George Washington Bridge into the Hudson River.

Clementi’s death and the criminal case against Ravi started a national conversation about cyberbullying and homophobia. Clementi’s parents formed a foundation to address bullying and lesbian, gay, bisexual and transgender issues.

Ravi was sentenced Thursday to probation plus 30 days in jail, and won’t serve any additional time under the plea agreement. His original conviction resulted in a 30-day jail sentence, although he could have gotten up to 10 years in prison.

Afterward, his lawyer Steven Altman told reporters outside the courtroom that Ravi “just wants to disappear.” Ravi, who now works in IT in New York City, said he felt relieved the case is over, NJ.com reported.

Jurors first heard testimony in 2012 during a three-week trial that in September 2010, Ravi saw his roommate and another man kissing when Ravi used a friend’s computer to view a few seconds of live streaming video from the dorm-room. The jury heard testimony that Ravi told others about what he saw in person, texts, instant messages and tweets.

The jury convicted Ravi of bias intimidation, invasion of privacy and other crimes. But his lawyer appealed, citing a 2013 state Supreme Court ruling that focused on the alleged perpetrator’s intent as more important than a victim’s perception of alleged bias.

The appeals court agreed that the law could be applied retroactively and also ruled that evidence prosecutors used to prove bias “tainted the jury’s verdict on the remaining charges, depriving defendant of his constitutional right to a fair trial.”

Clementi’s parents, Joe and Jane, released a statement Thursday, urging witnesses of cyber bullying, harassment and humiliation “to become upstanders for those in our society like Tyler, who cannot stand up for themselves.”

“Interrupt it, report it and reach out to victims to offer support,” their statement said. “If this had happened in Tyler’s case our lives might be very different today.”