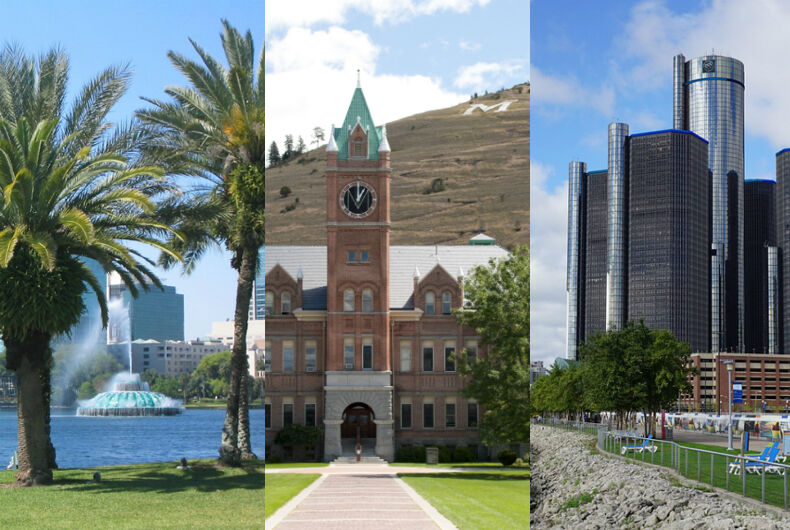 Orlando, Missoula, and Detroit are among the cities that received a perfect score in this year's HRC Municipal Equality Index.Photo: Composite

Every year, the Human Rights Campaign evaluates U.S. cities for its Municipal Equality Index. This year, it gave special recognition to those cities without statewide protections that rated 85 or higher out of 100, dubbing them All Star Cities.

“This year, dozens of cities across the nation showed they are willing to stand up for LGBTQ people in their communities even when state governments are not,” said HRC President Chad Griffin. “Unfortunately, our opponents have witnessed this progress too, and in recent years, anti-LGBTQ lawmakers have pushed spiteful legislation aimed at pre-empting local protections. That’s why it’s so important that we continue to not only fight for equality at the state and local levels, but to enact comprehensive federal protections for LGBTQ people under the Equality Act.”

Cities were ranked on a variety of criteria in five categories: non-discrimination laws, municipal employment policies (including transgender-inclusive insurance coverage and non-discrimination requirements for contractors), inclusiveness of city services, law enforcement (including hate crimes reporting), and municipal leadership on matters of equality.

Of the 37 All Star Cities, 22 received a 100 rating thanks to optional bonus points for things like having openly LGBTQ elected officials or offering services to people with HIV/AIDS.

“Despite another year of legislative attacks on LGBTQ equality, we are not merely holding our ground; we also continue to make significant gains across the country,” said Rebecca Isaacs, Executive Director of the Equality Federation Institute.