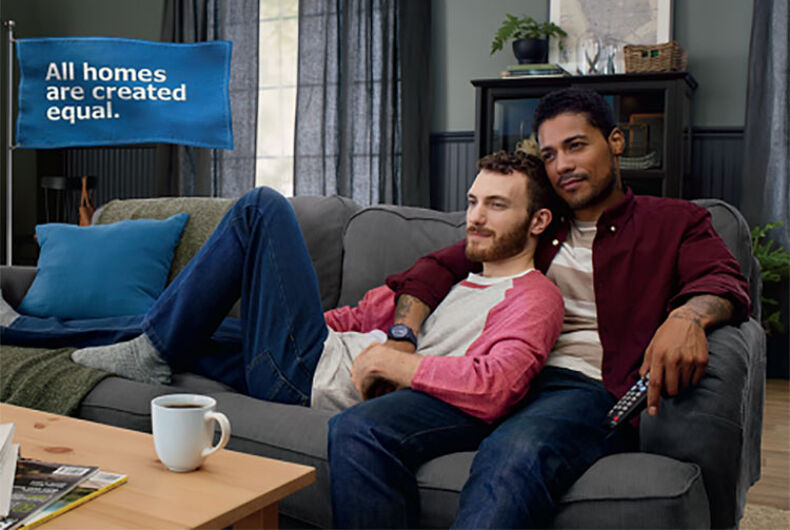 To sell more of its stuff, Ikea is showing less of its stuff in its latest ad campaign, reports AdWeek, and what it’s showing instead is a more diverse selection of Ikea customers enjoying its stuff. For example, one ad features models playing a mixed race gay couple chilling on an Ikea sofa enjoying a cup of java and each other’s company in front of the television.

They’re hardly the first gay characters in an Ikea ad, of course. AdWeek reports that tradition dates way back to 1994. But what’s different is that they are part of a broader campaign to focus on people instead of just the merchandise, and the agency behind the ad gives a very affirming nod to marriage equality and equal rights with a prominent banner flying next to their couch, proclaiming “All homes are created equal.”

The new ads kick off a year-long campaign bearing the slogan, “We Help You Make It,” suggesting to consumers that Ikea can help them fulfill their definition of the American dream, whatever it might be.

“There are so many different ways that Americans live—multigenerational, gay parents, etc.—that define the real portrait of the America that’s really out there,” Stone told Adweek. “If we’d put across 20 different living situations, they’d all be equally powerful.”

“People are finding it harder to make it in today’s society, but the optimism is still there,” Ikea’s Christine Whitehawk told the magazine. “We’re trying to get the message out that we’re here to partner with them to create that everyday better life that they want to have.”

Watch a commercial that’s part of this campaign for Ikea, below: