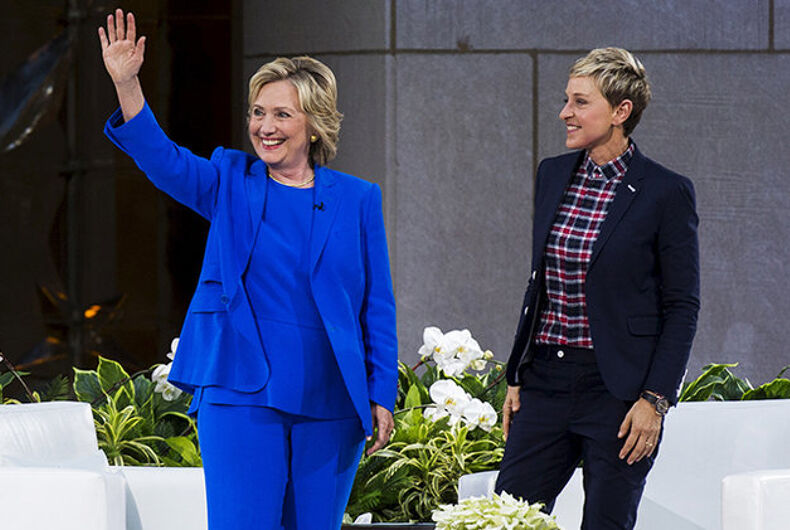 Attorney Larry Klayman has spent a sizable portion of his career going after Bill and Hillary Clinton with dozens of lawsuits. Now he is floating an old rumor and conspiracy theory that Hillary is a closeted lesbian and that more or less all those in power on the left know about it.

After granting LGBT people the right to exist — Hey, thanks! — he launches into asking why, in this accepting and tolerant time and while publicly declaring her support for the community, Hillary hasn’t said she is gay.

In today’s world, it is no longer a social stigma to be gay or lesbian, and as a result the Supreme Court has even ruled that they constitutionally are to be accorded the right to marry each other. As a result, I have much less respect for those gays and lesbians who continue to live in the closet and hide their lifestyle, particularly when this happens for partisan political purposes. Case in point, one Hillary Rodham Clinton, who has apparently lied about her sexual preference for decades to help pave the way for her presidential candidacy.

In the 1990s, as you know, I represented nearly all of the women who had come forward to allege that they had been harassed, raped or had affairs with Mrs. Clinton’s husband, Bill Clinton. I did not represent Gennifer Flowers, Dolly Kyle Browning (now Dolly Kyle), Paula Jones, Kathleen Willey and Juanita Broaddrick on “sex stuff,” but primarily because Hillary had put together a so-called “War Room,” comprised of herself, James Carville and George Stephanopoulos, to try to destroy these women and as a warning to other women who might come forward to further disclose Slick Willy’s sexual proclivities, to put it nicely. This was not because Hillary had great love for the future president, but to protect Hillary’s own standing to one day run for the presidency.

In the course of representing Gennifer and Dolly in particular, two women Bill (Gennifer calls him “Bill”) and Billy (Dolly calls him “Billy”) had been having affairs with for years at the same time, they both told me that Hillary couldn’t have cared less. Indeed, according to both Gennifer and Dolly, both of whom asked Bill/Billy why he would cheat on Hillary, the future president told them that this was because Hillary is “gay.”

He says journalist and political writer Seymour Hersh also claimed Hillary was a lesbian, during a meeting the two had about a budding controversy concerning China and U.S. campaign finance.

“Hillary is gay, you know, and all the left knows this,” he claims Hersh said.

Indeed, that Hillary is a lesbian became so widely known, although no one would specifically talk about it, that the joke in Washington, D.C., at the time was: “What is the only thing that Bill and Hill have in common?” Answer: “They both date the same women!”

While I knew the names of some of these “women,” I never revealed them publicly, although rumors abound. In recent years, Huma Abedin, the Palestinian wife of pervert Anthony Weiner and one of Hillary’s top aides, has been one of those rumored to be “in bed” with Hillary. Indeed, this might help explain her marriage to disgraced former Rep. Weiner and why it did not end sooner for political reasons. But I do not make any accusations.