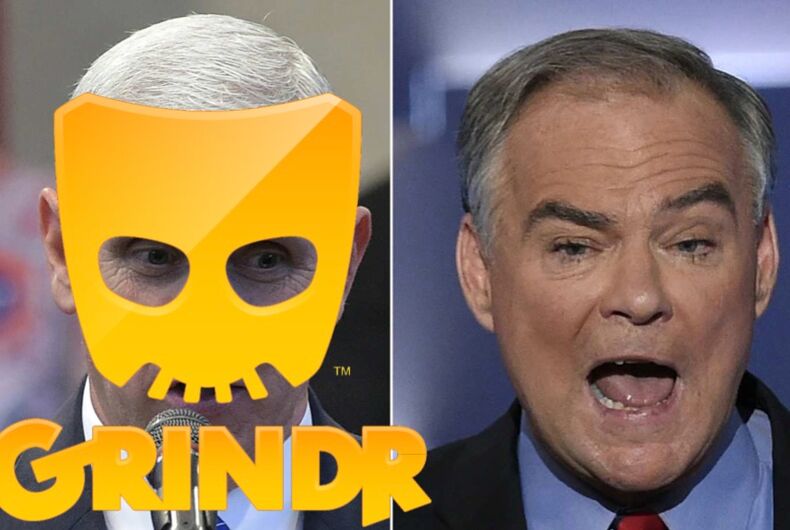 There was some serious drama on Grindr’s Twitter page last night.

The exercise started out innocently enough, with Branum making middle school jabs at both candidates, first by comparing Pence to “a cartoon turtle” and then by saying Tim Kaine is “1/4 bobblehead on his mother’s side.”

But not everybody found the joke funny. Or even kinda funny.

.@Grindr aww you were doing so well until this one!

You probably want to delete this

… or we could think about the torn-apart families, people uprooted from their homes, etc. Not just about lost chances to be laid.

really? You tried and failed. pic.twitter.com/BODuzznnyt

After it became clear the tweet had hit a nerve, Grindr immediately went into damage control. The very next tweet was a disclaimer from Branum that sounded an awful lot like it was written for him by the app’s PR team:

Fun reminder: right I (@guybranum) am tweeting for @grindr, these opinions are mine, not necessarily @Grindr's pic.twitter.com/9fUTlOzOs9

That was followed by another tweet a short while later:

I (@guybranum), am white, and I'm sorry for the extent to which my privilege made me feel it was ok to joke about deportation.

He could have left it at that. But instead, Brenum decided to dig himself into an even deeper hole by arguing with people.

They asked me to!

I got a perfect score on my LSATs.

That was me, @guybranum, tweeting the #VPDebate. I got distracted about half way through by people yelling at me for the deportation tweet.

So what’s the takeaway from all this… aside from yet another reason why hookup apps and late night comedian’s might want to refrain from trying to make serious political commentary?

Mathew Rodriguez at Mic.com says that, in addition to ignoring the fact that many of the LGBTQ people who would be deported under a Trump/Pence administration would be sent back to countries that are hostile towards gay people, it highlights the ongoing issue of white privilege within the gay community:

What do you think? Were the tweets by Branum sent from Grindr’s Twitter account offensive? Or are people taking what was meant to be a flippant remark too seriously?