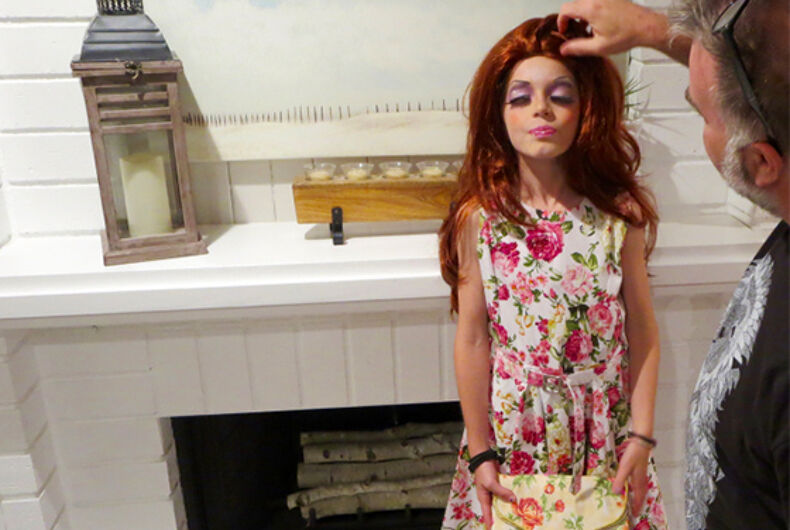 C.J. as Bob The Drag Queen, with FuGuncle Michael with the assist. Photo: Raising My Rainbow

A 9-year-old gender nonconforming boy is dressing as his hero for Halloween, “RuPaul’s Drag Race” winner Bob The Drag Queen, with a little help from his supportive mother and his talented gay uncle.

“Bob, RuPaul and all the queens are brave, strong heroes for my rainbow son. They’ve taught him to celebrate his uniqueness, cultivate his own style and let criticisms roll off his back. They’ve taught him the importance and power of loving himself. They’ve also taught him a few words and phrases that I’ve told him he can’t use until he’s 18,” his mother, Lori Duron, writes on her blog Raising My Rainbow.

C.J. informed her that he would “need her dress and purse and hair and makeup and everything.”

“Now, let’s be clear. I’m not a seamstress, nor a makeup artist. I’ve never styled a wig, nor made a purse,” she admits.

So she called on the help of her gay brother Michael, at the request of her son, to help successfully match the style seen in the famous drag queens music video “Purse First.”

“You can’t order this costume on online, mom! Call my FuGuncle (fun gay uncle)!” he told her.

“Uncle Michael set up a classroom in our dining room and taught us how to style the wig and do the makeup, because he won’t be in town to help on Halloween. I hope that when the big night finally gets here, my newly learned drag queen skills don’t fail me,” she adds.

C.J. has already prepared his porch stance, which will be sideways so that he comes into view “purse first,” as Bob would want it.

When asked by his friends what he is going to be for Halloween he has remained tight-lipped, but not, as his mother feared, because he worries about being teased. Rather, he doesn’t want anyone stealing his awesome idea.

C.J., you have already won Halloween. Shantay, you stay.