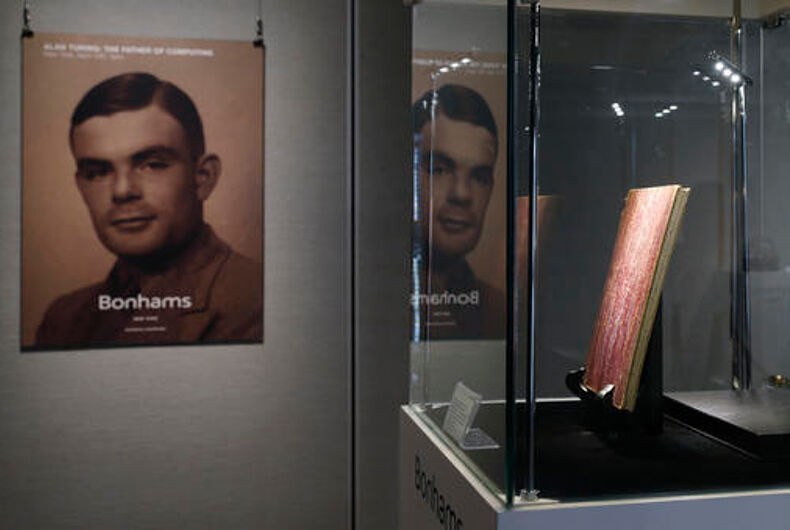 FILE - In this Thursday, March 19, 2015 file photo, a notebook of British mathematician and pioneer in computer science Alan Turing, the World War II code-breaking genius, is displayed in front of his portrait during an auction preview in Hong Kong. Britain's government will posthumously pardon thousands of gay and bisexual men convicted under long-repealed anti-gay laws. The calls for a more sweeping action came after World War II codebreaker Alan Turing was awarded a posthumous royal pardon in 2013 after a conviction of indecency in 1952. The gay computer science pioneer was stripped of his security clearance and later committed suicide. Photo: (AP Photo/Kin Cheung, File)

LONDON (AP) — Thousands of men who were convicted under now-abolished British laws against homosexuality are to receive posthumous pardons, the government announced Thursday. Those who are still alive can will be eligible to have their criminal records wiped clean.

The Ministry of Justice said the pardons apply to men convicted for consensual same-sex sexual relations before homosexuality was decriminalized several decades ago. Men living with convictions can apply to the government to have their names cleared.

“It is hugely important that we pardon people convicted of historical sexual offenses who would be innocent of any crime today,” he said.

Calls for a general pardon have been building since World War II codebreaker Alan Turing was awarded a posthumous royal pardon in 2013.

The computer science pioneer helped crack Nazi Germany’s secret codes by creating the “Turing bombe,” a forerunner of modern computers. His work helped shorten World War II, and he was an innovator of artificial intelligence.

After the war, Turing was prosecuted for having sex with a man, stripped of his security clearance and forcibly treated with female hormones. He died in 1954 at age 41 after eating an apple laced with cyanide.

A few other countries, including Canada and New Zealand, are considering pardons for people convicted under now-repealed laws against gay sex.

Gay-rights advocacy groups in the United States said they knew of nu U.S. state which had contemplated similar action.

However, the U.S. military — after lifting a ban that prevented gays from serving openly in the ranks — adopted a policy which enabled gay soldiers who had been forced out to upgrade their discharges from dishonorable to honorable.

Sex between men remained illegal in England until 1967 — and even later in Scotland and Northern Ireland. The age of consent for gay people was not lowered to 16, the same as for heterosexuals, until 2001.

Many gay rights campaigners welcomed Thursday’s announcement. But some said the government should go further and issue a blanket pardon, rather than making men apply individually to have their criminal records vacated.

Others said they wanted an apology, not a pardon.

“To accept a pardon means to accept that you were guilty. I was not guilty of anything,” said 94-year-old writer George Montague, who was convicted of gross indecency — then a commonly used charge for sex between men — in 1974.

“I think it was wrong to give Alan Turing, one of the heroes of my life, wrong to give him a pardon,” Montague told the BBC. “What was he guilty of? Being born only able to fall in love with another man.”