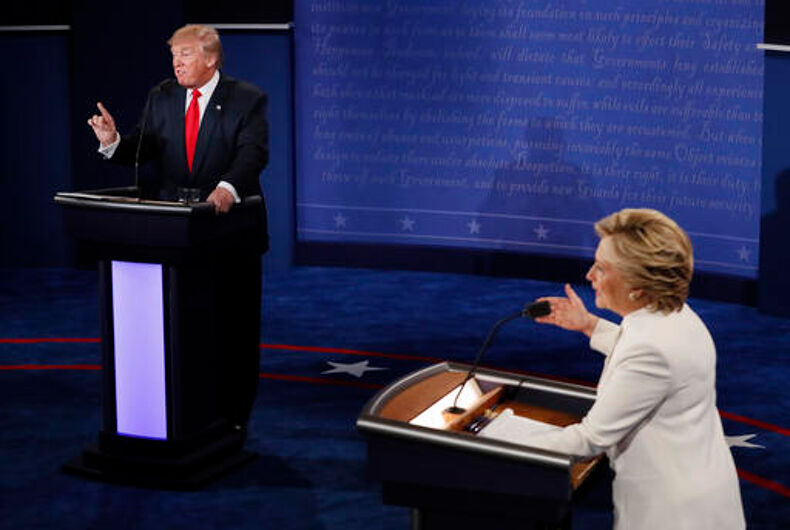 WASHINGTON (AP) — Good riddance to Campaign 2016, the election that put the “ugh” in ugly.

Headed for history books a week from Tuesday, the duel between Hillary Clinton and Donald Trump became a battle of “nasty women” and “bad hombres” vs. “deplorables” and voters who are “irredeemable.”

A beauty queen, a Gold Star family, an ex-president and his baggage, the FBI director, even the pope were drawn into the fray.

At times, the campaign rhetoric has been so raunchy it’s forced middle-school civics teachers to censor their lesson plans. Thank Trump for that.

But Americans can’t say they weren’t warned about what lay ahead.

On June 16, 2015, mere minutes into a rambling campaign announcement speech, Trump was labeling Mexican immigrants as rapists and criminals, and pledging to build “a great, great wall” to keep them out.

He’s been horrifying and-or delighting people with his provocations ever since.

Eleven Republicans were already in the race when Trump joined the field, with five still to come — a boatload of current and former governors and members of Congress among them. It was reasonable to view the impolitic nonpolitician Trump as, at best, an improbable choice to win the Republican nomination.

Clinton, by contrast, strode into the Democratic race two months earlier with a commanding resume and a sunny announcement video that instantly made her the presumed heir apparent for her party’s nomination.

She looked poised to finish the business of shattering “that highest, hardest glass ceiling” she couldn’t quite reach in a 2008 race against Barack Obama.

This time, it was Bernie Sanders who crashed her party and put the lie to the conceit of a cakewalk to the nomination. (Three more Democrats later joined the field, too, but without much impact.)

And thus the table was set for one of the nastiest, soul-crushing presidential campaigns in history.

In the end, no matter who wins, the next president will be one of the most unpopular ever.

“If the central promises of modern politics are peace and prosperity, we really haven’t had either for a long time,” said William Galston, a Brookings Institution scholar and former official in Bill Clinton’s administration. “That created an atmosphere of discontent and protest that affected both political parties this year.”