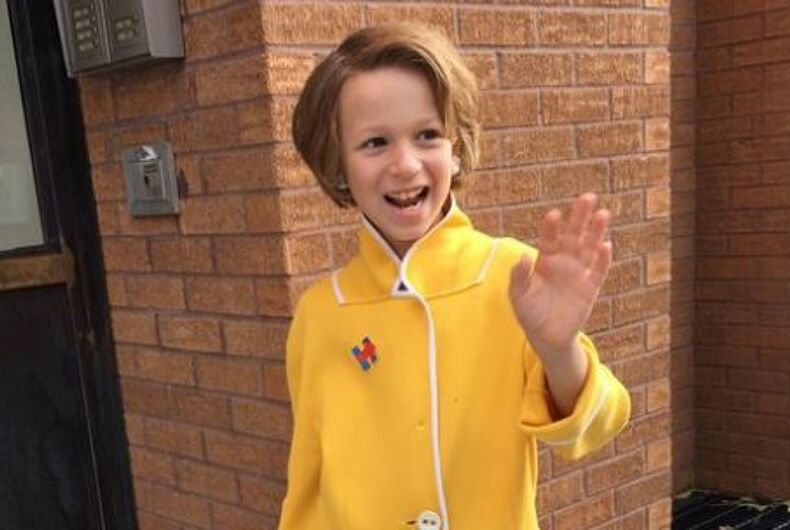 An eight year-old boy killed it in his Hillary Clinton costume, and his moms had to share it on Twitter. It was too good not to put out into the world.

The couple, who live in Brooklyn, tagged Clinton in the picture, telling her that their son is with her, today and every day. In a subsequent tweet, they shared the backstory, writing that their five year-old daughter didn’t have a costume so they suggested Clinton. She wasn’t into it, so their son said, “Well someone’s gotta be Hillary.”

But since one of the fundamental rules of social media is that we cannot have nice things, it wasn’t long before antigay bigots came along to post their hate in response to the viral tweet.

Dressing up a boy as a girl is stomach-churning.

This is why gays shouldn’t be allowed to adopt.@DebbersGarhttps://t.co/ZTT46qpq2V

@marylovefreedom @DebbersGar @HillaryClinton @HFA Because they are a lesbian couple and they’re indoctrinating him into becoming gay. Sick.

@DebbersGar @aburbeconditaX @HillaryClinton @HFA This is the sickest thing I’ve seen on the internet all week.

@DebbersGar @Mannyratback1 @HillaryClinton @HFA U should be arrested for child abuse

Thankfully, there were plenty of people who offered their support to counter the trolls.

@DebbersGar @HillaryClinton that hair. So amazing. So perfect.

@DebbersGar @HillaryClinton @HFA That is some genuinely marvelous parenting! Feeling excellent about the future for a whole lotta reasons.

The 2016 presidential campaign put the ‘ugh’ in ugly