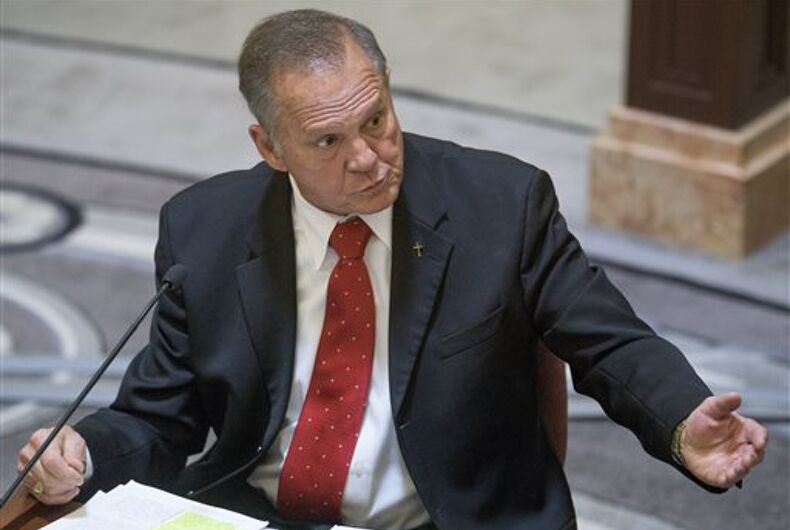 Alabama Chief Justice Roy Moore testifies during his ethics trial before the Alabama Court of the Judiciary at the Alabama Judicial Building in Montgomery, Ala., on Wednesday Sept. 28, 2016. He is accused of encouraging judges to defy the U.S. Supreme Court's ruling legalizing gay marriage. Photo: (Mickey Welsh/Montgomery Advertiser via AP, Pool)

MONTGOMERY, Ala. (AP) — Alabama Chief Justice Roy Moore — famously removed from office 13 years ago for refusing to remove a Ten Commandments display — appeared before a judicial disciplinary panel Wednesday to answer accusations that he urged defiance of the federal courts again: This time on gay marriage.

The state’s Judicial Inquiry Commission is seeking Moore’s removal from the bench, arguing that in January he directed, or at least encouraged, the state’s probate judges to refuse marriage licenses to gay couples.

“We are here 13 years later because the Chief Justice learned nothing from his first removal. He continues to defy the law,” said John Carroll, a lawyer representing the Judicial Inquiry Commission, told the panel.

Moore, taking the stand in his own defense, dismissed the accusation as “ridiculous.”

“It would be against the principles that I hold dear to tell anyone to defy a court order,” Moore, 69, said.

The outspoken Republican jurist now waits for his judgment day. The nine-member court has 10 days to rule. The chief judge, Michael Joiner, said the court would return its decision “as soon as possible.”

It is not an unfamiliar place for Moore. The same panel removed Moore in 2003 after he refused to obey a federal court order to remove a 5,200-pound Ten Commandment monument from the state judicial building. He was re-elected to the bench in 2012, a victory he described as a vindication.

Moore’s supporters gave him a loud ovation when he entered the ornate courtroom where he normally presides as the state’s top judge.

In the five-hour hearing Wednesday, Moore was alternately portrayed as a politician on a mission to block gay couples from marrying in Alabama or a judge who was merely trying to answer questions from confused probate judges.

Alabama had been in a twisting legal battle over gay marriage that one lawyer dubbed a “game of constitutional chicken.” Gay couples began marrying in some parts of Alabama after a federal judge ruled the state’s same-sex marriage ban was unconstitutional in January of 2015. The weddings came to an abrupt halt when the Alabama Supreme Court in March of 2015 ordered probate judges to continue enforcing the ban.

The U.S. Supreme Court in June of 2015 ruled gay and lesbian couples had a fundamental right to marry and U.S. District Judge Callie Granade ordered that she was permanently barring Alabama probate judge from enforcing Alabama’s gay marriage ban.

The accusations against Moore center around a Jan. 6, 2016, administrative order he sent probate judges saying the order to refuse the licenses remained in “full force and effect.”

Moore said he was only correctly noted that the Alabama Supreme Court hadn’t yet ruled on what to do in the wake of the U.S. Supreme Court decision.

“I gave them a status in the case, a status of the facts that these orders exist. That is all I did,” Moore said.

But another lawyer for the commission, R. Ashby Pate, argued by that point it was “game over” and that Moore was trying to muddy what was a settled issue.

“His order sowed confusion. It did not clear it up. He urged defiance, not compliance,” Pate said.

Moore stands accused during a season of political upheaval in Alabama. The house speaker was removed from office this summer for criminal ethics violations, and a legislative committee will decide if evidence supports impeaching Gov. Robert Bentley after he was accused of having an affair with a top staffer.

The 2016 proceeding took on much of the flavor of Moore’s 2003 removal as Moore stood by his actions and demonstrators filled the courthouse steps.

Rainbow flags decorated one side of the courthouse steps while Moore’s supporters blared Christian music and waved “Judge Moore is Right” signs.

“The truth is homosexuality is wrong,” said Donna Holman, who traveled 12 hours from Iowa to support Moore.

Kim McKeand and Cari Searcy, the lesbian couple whose suit led to a federal judge declaring Alabama’s gay marriage ban unconstitutional, told reporters that Moore seemed to be on a personal mission to block marriage equality in Alabama ever since the ruling in their case.

“Something happened that I didn’t expect. There was a tide of love that rolled through Alabama and people were standing up and saying, ‘No. This is my state too,'” Searcy said.

Not just for bears and otters any more: Scruff for cats is here!