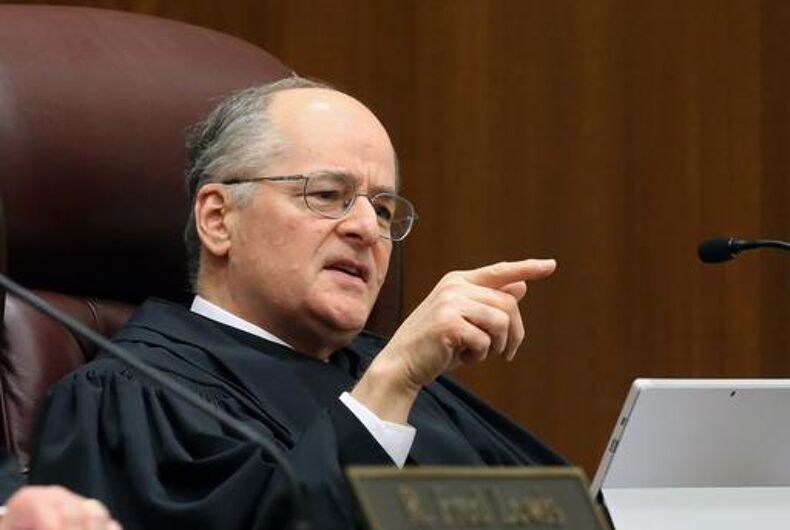 JERSEY CITY, N.J. (AP) — Donald Trump has added 10 names to the list he says he’d use to fill Supreme Court vacancies if he becomes president, including a U.S. senator whose inclusion helped secure a bitter rival’s endorsement.

The announcement of the new names Friday, three days before the first presidential debate, appeared to be another attempt by the Republican nominee to solidify support among conservatives still reticent about his candidacy. And it appears to have worked.

Hours after the list was unveiled, Texas Sen. Ted Cruz, a one-time rival, finally announced he’d be voting for Trump, after declining to do so during a stunning speech at the party’s national convention. In a statement posted on Facebook, Cruz specifically cited Trump’s Supreme Court list and its inclusion of his friend and colleague, Utah Sen. Mike Lee.

The expansion also adds several minority judges to Trump’s previously all-white list, including Venezuelan-born Federico Moreno, a 64-year-old judge of the U.S. District Court for the Southern District of Florida. It includes an African-American judge, a South Asian judge and a female judge who served in the Marines.

In May, Trump unveiled his original list of 11 federal and state court judges as potential replacements for the late Justice Antonin Scalia. At the time, he was trying to rally conservatives and clinch the nomination.

He and his allies have repeatedly cited control of the Supreme Court as a top reason why Republican skeptics should rally around his candidacy.

“We have a very clear choice in this election. The freedoms we cherish and the constitutional values and principles our country was founded on are in jeopardy,” Trump said in a statement.

Trump has sometimes varied in his descriptions of the names — at times suggesting they would serve more as a guide to the kinds of judges he’d select rather than a definitive list.

But on Friday, Trump assured the names were set. “This list is definitive and I will choose only from it in picking future justices of the United States Supreme Court,” he stated.

That commitment and Lee’s inclusion appear to have sealed the deal with Cruz, one of Trump’s most high-profile holdouts.

In a Facebook post announcing his decision to endorse a man he’d once called a “pathological liar” and “utterly amoral,” Cruz called control of the court the most important issue at stake in the election.

“For some time, I have been seeking greater specificity on this issue, and today the Trump campaign provided that, releasing a very strong list of potential Supreme Court nominees — including Sen. Mike Lee, who would make an extraordinary justice — and making an explicit commitment to nominate only from that list,” he wrote.

“This commitment matters,” he added, “and it provides a serious reason for voters to choose to support Trump.”

Lee said he appreciated being considered, but added, “Right now I’m focused on my job in the Senate, where I’m in a good position to defend the Constitution by fighting against government overreach.”

Lee is the second member of his family to appear on Trump’s wish list. His brother, Thomas, who has served as a justice on Utah’s Supreme Court since 2010, was on the original list.

“While my brother and I might disagree as to which list is better, they’re both great,” the senator joked.

—Charles Canady, a justice of the Florida Supreme Court. A former Florida Congressman, Canady was the prime sponsor of the first congressional effort to ban the procedure abortion opponents call “partial-birth abortion.” He also served as general counsel to former Florida governor and Trump rival Jeb Bush, according to a biography from the conservative Federalist Society think tank.

—Timothy Tymkovich, chief judge of the Tenth Circuit Court of Appeals. Tymkovich formerly served as Solicitor General in Colorado, where he argued several cases in front of the Supreme Court. Among them: Colorado’s failed bid to preclude the state from providing legal protections for gays and lesbians.

—Amul Thapar, a judge of the U.S. District Court for the Eastern District of Kentucky. Thapar, who is of South Asian descent, has also served as an assistant U.S. Attorney in Washington and in the Southern District.

—Robert Young, chief justice of the Michigan Supreme Court. The only African American judge on Trump’s list, Young previously served as a judge on the Michigan Court of Appeals.

—Keith Blackwell, a justice of the Georgia Supreme Court. Blackwell previously served on the Georgia Court of Appeals and as deputy special attorney general in the state.

—Neil Gorsuch, a judge of the Tenth Circuit Court of Appeals. Gorsuch previously served in the Justice Department as a deputy assistant attorney general.

—Margaret Ryan, a judge of the U.S. Court of Appeals for the Armed Forces. The only woman added to Trump’s list, Ryan is a Marine Corps veteran who was deployed to Philippines during an uprising and to Saudi Arabia during the Gulf War.

—Edward Mansfield, a justice of the Iowa Supreme Court. Mansfield previously served as a judge on the Iowa Court of Appeals.

Tens of thousands march against same-sex marriage in Mexico