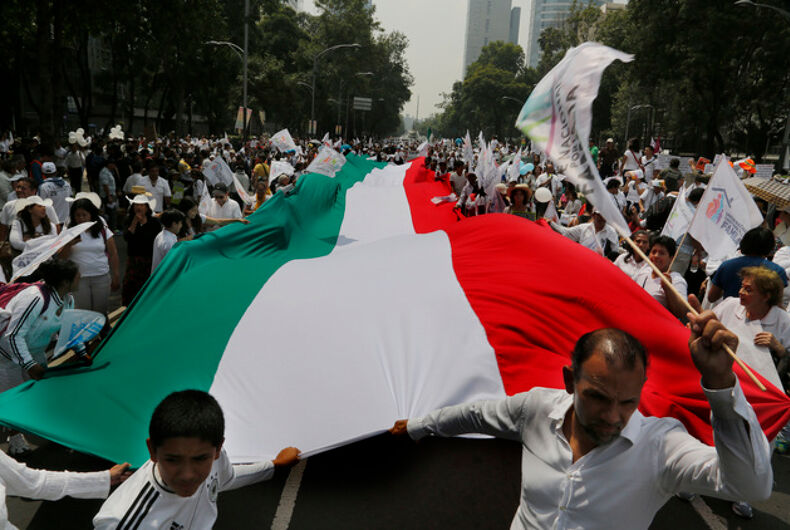 Demonstrators walk with a giant Mexican national flag during a march organized by representatives of the National Front for the Family, in Mexico City, Saturday, Sept. 24, 2016. Photo: AP Photo/Marco Ugarte

Organizers of the National Front for the Family estimated at least 215,000 people participated, and while that number could not be immediately confirmed, it was clearly one of the largest protest marches in Mexico in recent years.

“We are not against anybody’s (sexual) identity,” said Abraham Ledesma, an evangelical pastor who travelled from the border city of Reynosa, across the border from McAllen, Texas, to participate in Saturday’s march. “What we are against is the government imposition … of trying to impose gender ideology in education. As religious leaders, we don’t want to be forced to marry same-sex couples and call it marriage.”

Others carried signs saying “an adopted child deserves a mother and a father.”

On the other side of a police barricade separating the two sides at Mexico’s Independence Monument, a far smaller crowd of same-sex marriage supporters — perhaps a couple hundred — listened to music and speeches.

“They may be the majority,” said Felipe Quiroz, a gay activist and school teacher. “But just because they are the majority, doesn’t mean they can take rights away from minorities. That would lead us to a dark period, to fundamentalism.”

Many saw the massive march as the Roman Catholic church flexing its political muscle in a country where about 80 percent of people identify as nominally Catholic. In May, Pena Nieto proposed legalizing same-sex marriage nationwide. It is currently legal only in some places such as Mexico City, the northern state of Coahuila and Quintana Roo state on the Caribbean coast.

But in June, Pena Nieto’s party suffered unprecedented losses in midterm governorship elections, and his party has since put the proposal on the back burner in Congress.

Jose Medrano, a university professor, came to Saturday’s march from the northern state of Chihuahua, where the ruling party lost the governorship in June to the conservative, pro-Catholic National Action party.

“We may have influenced this, because the proposal (for same-sex marriage) was presented just a few weeks before the elections, and a lot of people were against it,” said Medrano.