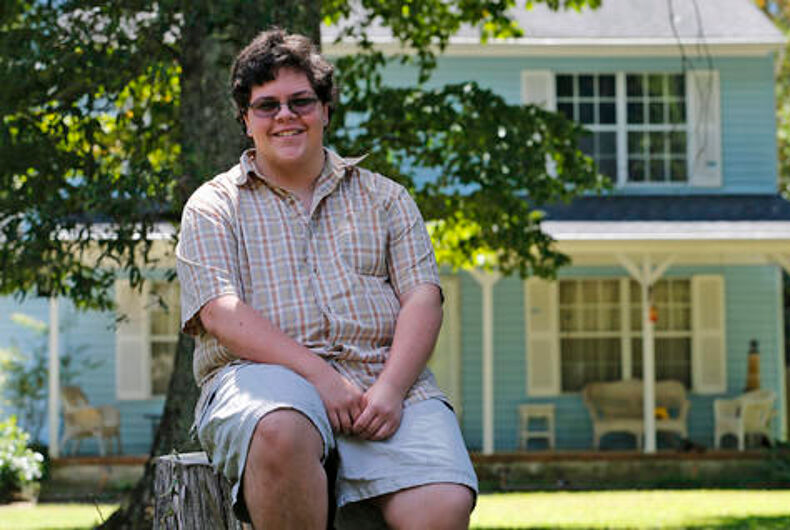 In this Monday, Aug. 22, 2016 photo, transgender high school student Gavin Grimm poses in Gloucester, Va. Grimm, who was assigned female at birth but identifies as male, heads back to Gloucester High School for his senior year as the U.S. Supreme Court considers whether to intervene in his case that challenges the county school’s policy barring him from using the bathroom of his choice. Photo: AP Photo/Steve Helber

RICHMOND, Va. (AP) — College applications and high school graduation are the biggest worries for most 17-year-olds. For Gavin Grimm, it’s waiting for the nation’s highest court to decide whether he can use the boys restroom.

Grimm, who was born female but identifies as male, heads back to Gloucester High School for his senior year this week as the U.S. Supreme Court considers whether to intervene in his case that challenges the county school’s policy barring him from using the bathroom of his choice.

For now, Grimm will have to continue using a private single-stall restroom or a bathroom in the nurse’s office. The 4th U.S. Circuit Court of Appeals sided in April with Grimm, but the Supreme Court recently ruled that the school board can keep him out of the boys restroom at least until the justices decide whether to hear the school board’s appeal.

If the Supreme Court declines to take Grimm’s case, the 4th Circuit ruling in his favor will stand. The appeals court said the policy violated federal law, deferring to a U.S. Department of Education rule that says transgender students in public schools must be allowed to use restrooms that correspond with their gender identity.

The Associated Press recently talked with Grimm about where the case stands and how it’s impacting his life:

When Grimm filed his lawsuit in 2015, he anticipated a quick legal fight, with the school board ultimately backing down, he said. He had no idea the case would rise all the way to the Supreme Court, thrusting him into the center of the polarizing debate over transgender rights.

“It’s absolutely a burden,” Grimm said. “I’m a 17-year-old. I’m just a person like anybody else. There’s nothing really extraordinary about me that would really make it ideal for me to be the one that’s doing this,” Grimm said.

The school board — which is urging the Supreme Court to hear the case — says it’s a privacy issue. They note that they have tried to accommodate Grimm by creating a unisex restroom, but Grimm says forcing him to use a separate bathroom than his peers is humiliating.

Grimm could graduate high school as early as January, and the Supreme Court isn’t likely to decide whether it will hear the school board’s appeal until sometime this fall.

If the court decides it take it up, the prohibition on him using the boys restroom will remain in effect until there’s a final ruling. If the Supreme Court denies the school board’s petition for review, a lower court order requiring the board to let Grimm use the bathroom of his choice will be reinstated.

While that means Grimm could be close to graduating before the matter is settled, he says his hope now is to pave the way for transgender students who follow in his footsteps.

“In my case, high school was kind of ruined for me,” Grimm said. “I guess my aim now would be to hope that other kids — other trans kids in my situation — will be able to enjoy high school because they won’t have to worry about fighting for the ability to use the correct restroom.”

The fate of Grimm’s case — the first of its kind to land in the Supreme Court — is now in the hands of its eight justices. Four of them must agree for the court to hear the case.

Maxine Eichner, a University of North Carolina professor who’s an expert on sexual orientation and the law, said the Supreme Court’s decision to block Grimm from using the boys bathroom for now may signify their desire to look at the issue.

But the justices may also want to wait until they get a conflicting appeals court decision in a similar case, Eichner said. A federal judge blocked the Obama administration’s transgender bathroom rule last month, but the administration could appeal it to the New Orleans-based 5th U.S. Circuit Court of Appeals.

For Grimm, what’s next is figuring out what he wants to do after high school. He plans to go to college, but doesn’t know where yet, he said. All he’s sure of now is that he wants to get out of Gloucester as soon as he can.

“I’ve been bullied all my life, and I have a lot of things here that I’d like to distance myself from,” Grimm said. “It’s not a positive place for me to be and if I can get out, I want to get out,” he said.