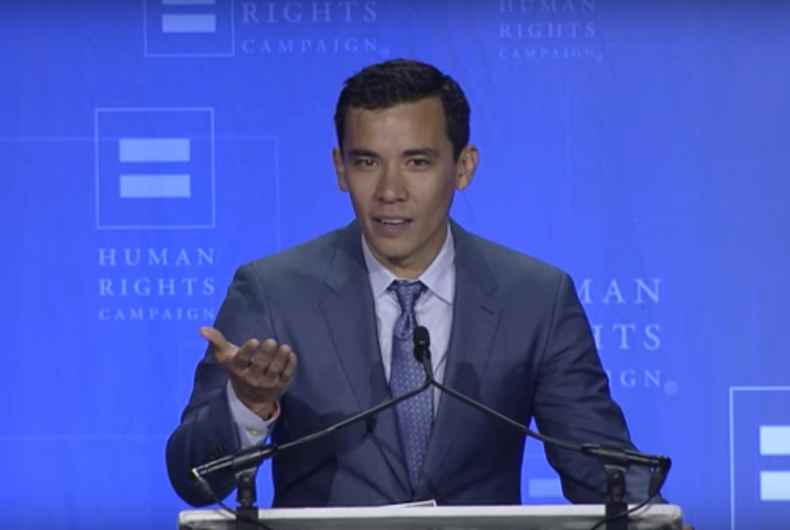 "How To Get Away With Murder" actor Conrad Ricamora received the 2016 HRC Visibility Award.

“How To Get Away With Murder” actor Conrad Ricamora accepted the Human Rights Campaign’s Visibility Award last weekend, speaking to his journey from a closeted teen in rural Florida, to an out actor portraying an HIV-positive, sexually active gay man of color on network TV.

“I will say that it’s a little ironic to be getting the Visibility Award because so much of growing up as a kid was spent trying to be invisible,” said Ricamora, who plays Oliver on the ABC show. “It was rough, not only being gay, but having the colored skin that I have. I was terrified that someone would see me as gay and I was also terrified that I would see myself for what I naturally was.”

Ricamora’s character is the only openly gay Asian American character on prime time television, and the actor says he’s proud to be able to provide that representation.

“I’m happy to be playing Oliver, and to be providing that visibility now not only for gay men but also for gay men of color and HIV positive people,” he said.

Ricamora also gave credit to those out actors who came before him, including George Takei, Sean Hayes, Sir Ian McKellen, and Jesse Tyler Ferguson.

Watch his inspiring speech below.

Life
Conrad Ricamora, How To Get Away With Murder, Human Rights Campaign (HRC), Visibility Award

Teen at center of ‘bathroom bill’ case speaks out: ‘I’m just a person’