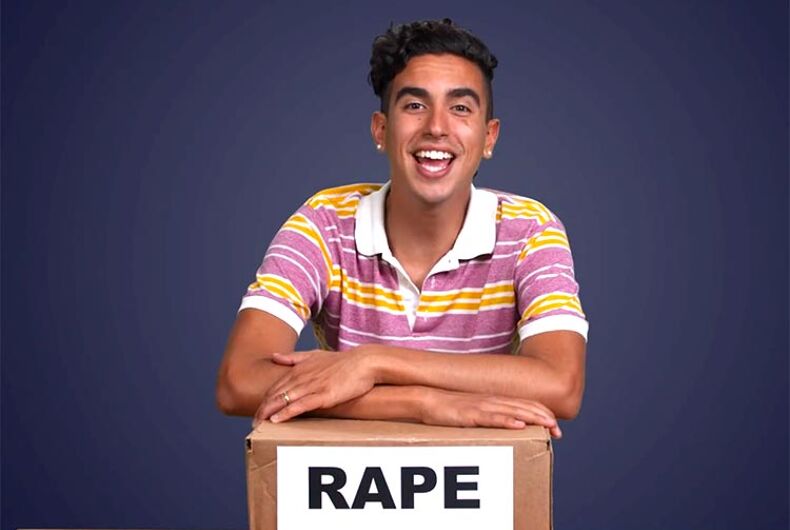 “Rape culture” can be an off-putting term. It sounds academic and abstract. It also sounds really intense and heavy. Blunt words for violent crimes combined with social science terms tend to have that effect.

That’s what makes out actor Dylan Marron’s “unboxing” of rape culture work so well. First, his unboxing pokes fun at the academic term “unpacking,” while illustrating its literal meaning in an accessible way. And then there’s the sarcastic humor.

The video is like an informercial for a “product” called rape culture.

“Today, we’re taking you inside one of the hottest items on the market,” he begins. “It’s literally everywhere!”

The first thing out of the Mary Poppins-sized box is the word “no.”

“Apparently if you look at it from different angles, it’s supposed to look like the word ‘yes,'” Marron explains. “Let me try it out … hmm, it still says ‘no.’ That’s funny!”

He goes on to speak to the role of comedians who make rape jokes, the privilege of wealth and whiteness (see: Brock Turner, the “Stanford rapist”), and victim blaming, all with a levity that inspires both chuckles and cringes.

Teen at center of ‘bathroom bill’ case speaks out: ‘I’m just a person’