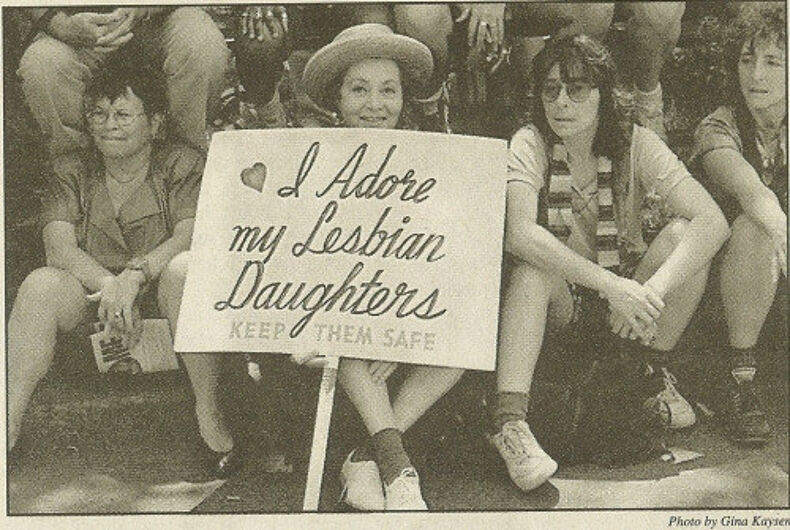 She’s been a staple of New York City Pride for more than 30 years. Literary agent Frances Goldin, 92, is the subject of a moving profile by BuzzFeed, in which the proud mother of two lesbian daughters shared her story of activism.

“Since the beginning of the parade, I’ve been going and waving my sign,” Goldin told the website. “It sort of hit a nerve with people, particularly those whose parents rejected them. The response to the sign is always so great — it urges me to keep going.”

Goldin and her husband raised their daughters, Sally, now 70, and Reeni, 68, on the Lower East Side of New York City. They came out as lesbians soon after New York City’s first Pride Parade in 1970.

“She really puts her money where her mouth is,” said Reeni of her mom. “She works for it. That’s her life. That’s just who she is.”

Goldin is often asked by LGBTQ paradegoers to speak to their own mothers, BuzzFeed reported.

“Everybody would come running up to her and cry, kiss her, and say, ‘Would you call my mother?’ or ‘Would you be my mother?’” Sally told the website. “She’s met people who she is still very close to at the parades. She’s a model for how parents should be behaving towards their kids.”

“I think I changed a few people’s minds and I’m glad about that,”Goldin said. “Everyone should support their gay and lesbian children, they’re missing a lot in life if they don’t.”

“She’d take down names and addresses and write letters to these kids’ mothers!” said Reeni. “She’s very extroverted. She loves the spotlight and she wears it well.”

And Goldin’s activism didn’t end when the Pride celebration did: she joined Occupy Wall Street protests in 2011 and has been arrested almost a dozen times, according to her daughters.

But Pride is special. Every year she’s held court on the northeast corner of 18th Street and 5th Avenue, always decked out in purple, the last Saturday in June. Well, almost every year: one year she had to skip the event, BuzzFeed reported, on account of having a heart attack.

At 92, holding up that sign can be more difficult than it was 30 years ago, so she brings along a wheelchair. “I sit down and I relax if I’m tired,”Goldin said. “I get kissed more than you can imagine. People in the parade rush over and kiss me — it’s very rewarding.”

As for next year, Goldin says:

“It’s very important to me and I’m very grateful that I’m able to carry it each year. I am now 92 years old and I hope to keep going for as long as I am able.”