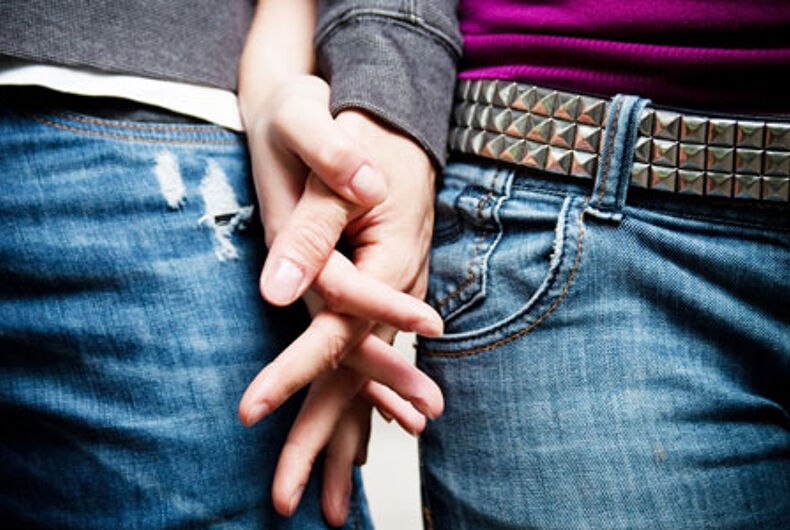 When James Lacey and his boyfriend stopped by Original First Turn Lounge in Port Orange, Florida over the weekend, the last thing they expected was to be told to stop being affectionate toward one another.

Lacey, who served three tours of duty in Iraq, told a local news station that the two were “kissing on the lips, hugging, holding each other. Just being like a normal straight couple, and they were pretty much offended by it.”

He says the restaurant’s manager pulled him aside to tell him customers were uncomfortable with the PDA. When he returned to the table and let the group know what had happened, they opted to leave.

“She said some of the customers were complaining about our PDA and were offended. The manager told us that it’s not welcomed here,” he said. “I’m pretty sure if you saw a man and woman giving kiss on the cheek or a kiss on lips, they’re not going to say that’s not tolerated here, that’s not welcomed. That’s ridiculous.”

When the TV station reached out to the establishment, the manager split hairs by saying they didn’t ask the group to leave.

“We are a patriotic and family restaurant of more than 30 years. We don’t discriminate against anybody. We never have and never will. Safety and comfort for all our customers is top priority,” they said.

“Everybody’s willing to take us in, but the second you show public affection, there’s somebody who’s offended by it,” Lacey said in response. “And we’re the ones who pay the price. We’re the ones who need to leave.”

He also took to social media to express his outrage and address the manager directly. He wrote on his Facebook page:

Today I came to your bar with a group of my friends (all gay). You were more than happy to take our money, but the second I kissed my boyfriend with a gentle peck on the lips… you told us “a customer was offended and it is not welcome”.

Ma’am, my name is Jim. I am a US Marine veteran. I served 3 tours in Iraq. I put that uniform on to protect the rights of all Americans. The right to be happy… the right live life no matter who you loved.

It’s people like you that is setting this country backwards. Instead of moving forward and realizing we need to come together as a country, you ma’am, are participating in groups that are no better than the natzis, kkks, and ISIS/al qaeda….. oh… and the gangs that think it’s right to destroy their own community to prove a point.

You obviously never served your country. You never had guts to wear that uniform. But by you presenting yourself the way you did, you just spit on the graves of all my brother and sisters in arms. They fought and died for all Americans to live freely and in peace. You ma’am, might as well as stepped on and burn the American Flag.

On the anniversary of 9/11, you just spread the same hatred we felt 15 years ago. Also, with the hatred you shown, you might as well have been the shooter at Pulse. I pray for you.

Lacey also says on his Facebook page that a lesbian employee of the bar saw his story and contacted him to say she had been repeatedly discriminated against by the restaurant’s management. He says she has quit her job and will be speaking to the media about it soon.

Watch video from News6 below.

Speculating about Alexis Arquette’s gender does no one any good