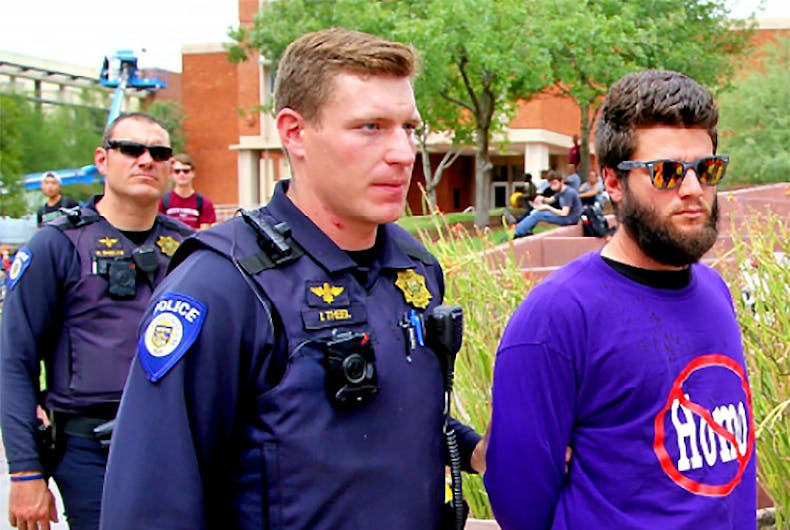 The University of Arizona student known on campus as “Brother Dean” for his aggressively offensive Christian sermons won’t be preaching or doing anything on campus anytime soon, after his arrest this week for assaulting a female student.

Dean Saxton was reportedly ranting against the LGBTQ community on campus on Wednesday, saying “gays are destroying the country.”

Typically he wears tee shirts with controversial messages to draw attention to himself, such as one calling women “whores” which has earned him the nickname, “the slut shaming preacher.”

On Wednesday, he was wearing a shirt with the word “homo” crossed out in the front and “Jesus Hates Sin” on the back, when fellow student Mackenzie Brandt approached him. As soon as she was close enough, the self-styled street preacher did a most un-Christian thing: he kicked her in the chest, according to the Phoenix New Times.

University police say the kick wasn’t just a tap, either. “She took a pretty good kick,” said Sergeant Filbert Barrera, a public information officer for the campus police, to the Times. “There were shoe marks on her chest.”

Saxton reportedly kept his Bible clasped in his hands as he was handcuffed, as can be seen in the video posted to YouTube by the university TV station. Bystanders cheered.

Saxton was booked into the Pima County Jail, charged with misdemeanor assault, and banned from the school’s Tucson campus for one year, said Sgt. Barrera. Bond was set at $641, and once posted he was released on his own recognizance pending a court date.

According to The Daily Wildcat, conditions for Saxton’s release are that he is not allowed to return to the incident location nor is he allowed to have any contact with the victim.

Brandt tweeted: “Brother Dean thinks he’s so invincible but I just got him arrested and banned from campus so HA.”

Watch the report from UATVch3 below.