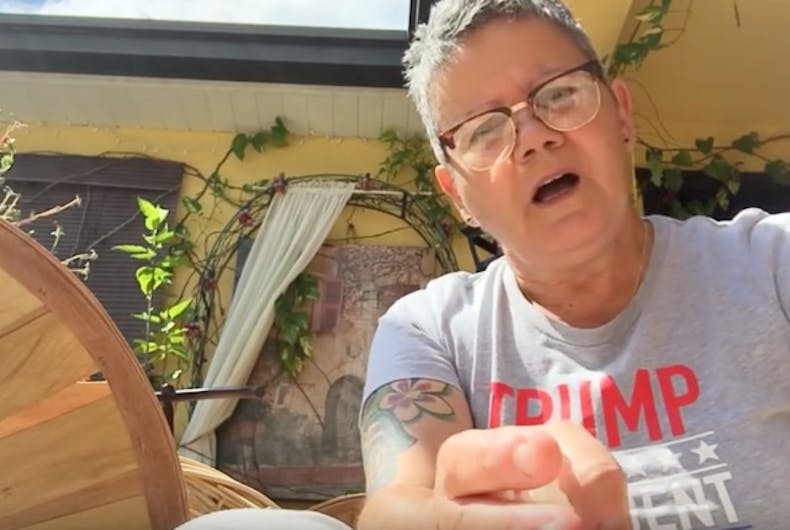 “Deplorable Deb,” a lesbian YouTuber and fervent Donald Trump supporter, is back with a new video rant that’s just as crazy as you would expect from that set up. This time the target of her ire is Robby Mook, the gay campaign manager for Hillary Clinton’s campaign.

“You are a disgrace as a Gay man to be Hillary’s Campaign manager, after all the money she takes from these countries that will kill us for being GAY,” Deb writes in the video’s description. She warms to her theme in the video and then takes a sudden turn into la-la land when she starts comparing ISIS to AIDS.

“You know Mr. Mook, I got to tell you something. I was out of the closet during the time of AIDS … you’re 36 years old, you don’t know anything about that. And for me that was a very bad time. I lost a lot of friends then,” she says. “And what I find now it’s not funny going into a gay club and having some terrorist from these Muslim countries coming to kill us. And you should be ashamed of yourself for campaigning for that bitch. Unbelievable.”

“And for me, this is a worse time now, worrying about ISIS killing us. You don’t even know the time of AIDS, that was a bad time that I never thought in my life I would see another time that I would fear for me and my other gay friends,” she says.

“But to know that you are a gay man, like us, and you’re her campaign manager. How disgraceful, that you are out there in the public supporting somebody that is going to come here and will kill you for being a gay man.”

Watch Deb’s rant below. We’ve also included her breakout hit “I am tired of being asked why as a Gay women I support Trump” below it just for fun.