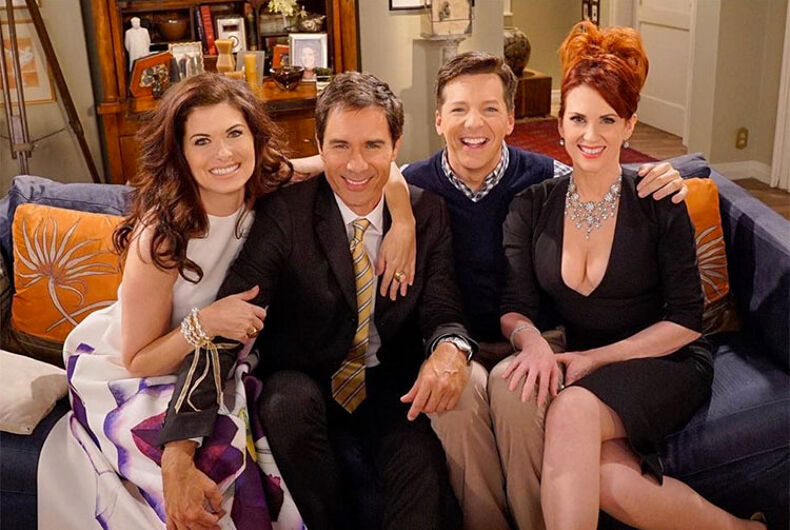 We’re learning more about how those ten glorious minutes that reunited Will, Grace, Jack and Karen in an election-themed mini-episode this week came to be. And could there be more Will & Grace to come?

McCormack revealed in an interview with People how this all started.

“It was all [show co-creator] Max Mutchnick. He had, years ago, installed the original set of Will & Grace at his alma mater at Emerson College there behind glass for 10 years, and it was about to travel back and he just thought, ‘What a great time.’ We’re always asked about a reunion but there were never any plans. Then he came up with this idea of sort of presenting both sides because he kept thinking all of this crazy election [news] would make a great Will & Grace episode. And so when the set became available and we were all available one day last week, we made it happen.”

Their characters picked up where we left them a decade ago, in Will & Grace’s famous apartment 9C, where the NBC series was filmed. The plot: who they will support in the upcoming election, Donald Trump or Hillary Clinton.

“It happened to be 10 years since we went off the air and the day that we shot it, it happened to be 18 years to the day that we premiered. It felt right. Just standing in that kitchen, that was always kind of Will’s power position, whether he was talking or not, just standing in that kitchen and watching the goings-on. It was amazing to stand there and feel that again.”

Messing hinted at the prospect for more W&G. “If there was a Will & Grace 2.0, my wish is that we did 10 [episodes] on, like, Netflix or Amazon or somewhere where it could be the naughty version of Will & Grace,” she told People. “Because you know we were on network television and there were certain lines of common storytelling that we were limited to so it would be fun to kind of go into that world where nothing is held back.”

Mullally added “Anything’s possible!” and McCormack said he’s up for a rematch, too. “Never say never. We’d all be interested to get that call, I think.”

Watch a clip below that reveals some of the antics behind the scenes of the mini-episode: