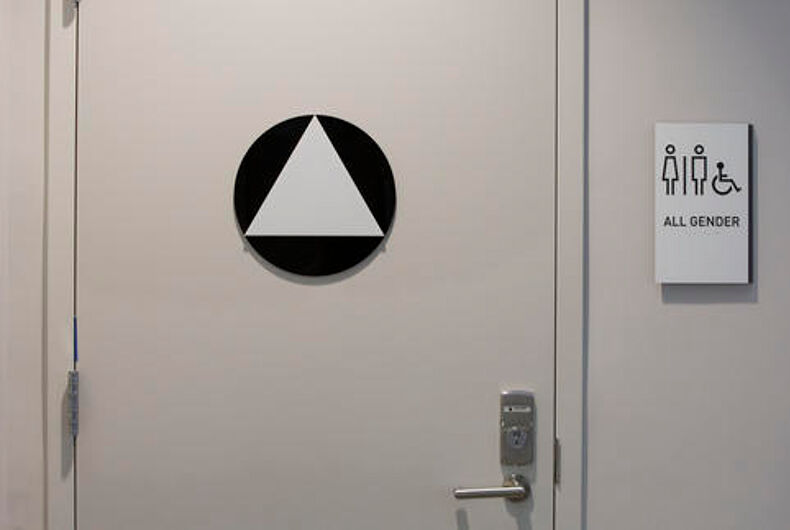 SACRAMENTO, Calif. (AP) — Gov. Jerry Brown waded further into the national debate over transgender rights Thursday as he signed a bill requiring that all single-stall toilets in California be designated as gender neutral.

The measure requires that businesses and governments post non-gender-specific signs on single-occupant restrooms by March 1, 2017. Democratic Assemblyman Phil Ting of San Francisco said his legislation would establish the nation’s most inclusive restroom-access law and “chart a new course of equality for the nation.”

“This simple concept is oddly cutting-edge when compared with the discrimination being enacted in other states,” Ting said earlier, while urging the Democratic governor to sign the bill.

Lawmakers sent the legislation to Brown in August, a day after a federal judge temporarily blocked an order by President Barack Obama requiring that public schools let students use bathrooms that correlate with their gender identity.

California students can already do so under a law Brown signed in 2013. He also approved adding gender identity to the state’s antidiscrimination laws in 2011.

Supporters of the new legislation said 19 states considered restricting access to restrooms, locker rooms and other facilities based on the user’s assigned sex, including North Carolina, which passed a law requiring people to use restrooms based on their sex at birth.

The U.S. Supreme Court will consider reviewing whether a transgender Virginia high school senior should be permitted to use the boys restroom.

Supporters say gender-neutral restrooms also would help parents with children of a different gender and adults caring for aging parents. It would not affect restrooms that have multiple stalls.

“What woman wants a man poking his head in the restroom door that somehow didn’t shut or lock? How many women want to use a urine-stained toilet seat?” he wrote in urging Brown to veto the bill.

He fears that what he called a “radical state takeover of the private sector’s restroom policies” could affect religious schools and home businesses.

Opponents said in December that they had failed to collect enough signatures to advance a proposed ballot measure that would have asked voters to require transgender people to use the public restrooms that correspond with their assigned sex.