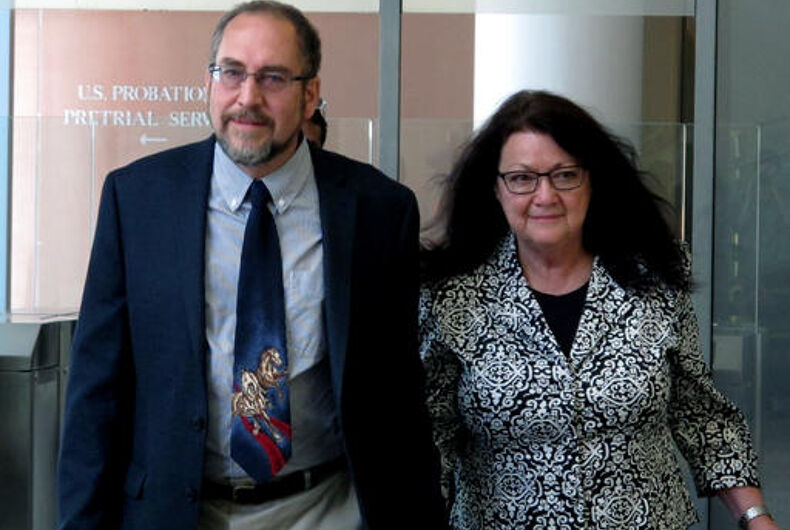 In this Sept. 22, 2016 photo, Virginia businessman Philip Zodhiates leaves U.S. District Court in Buffalo, N.Y., where he was on trial for international parental kidnapping and conspiracy. Zodhiates was convicted of the charges on Thursday, Sept. 29 after prosecutors say he helped a mother move her daughter out of the country and away from her ex-partner. Photo: AP Photo/Carolyn Thompson

Another person has been convicted of helping an ex-lesbian mother kidnap her child in 2009 after becoming an evangelical Christian.

Virginia businessman Philip Zodhiates was convicted Thursday of international parental kidnapping and conspiracy for driving Lisa Miller and her then 7-year-old daughter Isabella Miller-Jenkins to Canada so they could fly to Central America, and then helping set up living arrangements for them in Nicaragua.

Miller gave birth to her daughter while in a civil union with Janet Jenkins. But after their union dissolved, Miller converted to a conservative faith and denied Jenkins court-mandated visitation. When the court gave custody to Jenkins, Miller fled the country with the child.

Neither mother nor daughter has been seen in the United States since, and Miller is considered a fugitive.

During the court case, Zodhiates’ defense argued that the Mennonite businessman was simply helping out, and that his actions has nothing to do with the fact that Miller’s former partner and co-parent is a woman.

“This case is not about attitudes about lesbians or gays or same-sex marriage,” Zodhiates attorney argued. “When someone asks for help, [Zodhiates] helps without regard to sexual orientation, without regard to religion or creed.”

Zodhiates will be sentenced on January 30 and faces up to eight years in prison.

A Mennonite pastor, Kenneth Miller of Virginia, is already serving a 27-month prison sentence for his role in the kidnapping after being convicted in 2012. Another man, Timothy Miller, was recently deported from Nicaragua and arrested in the United States. None of the Millers are related.