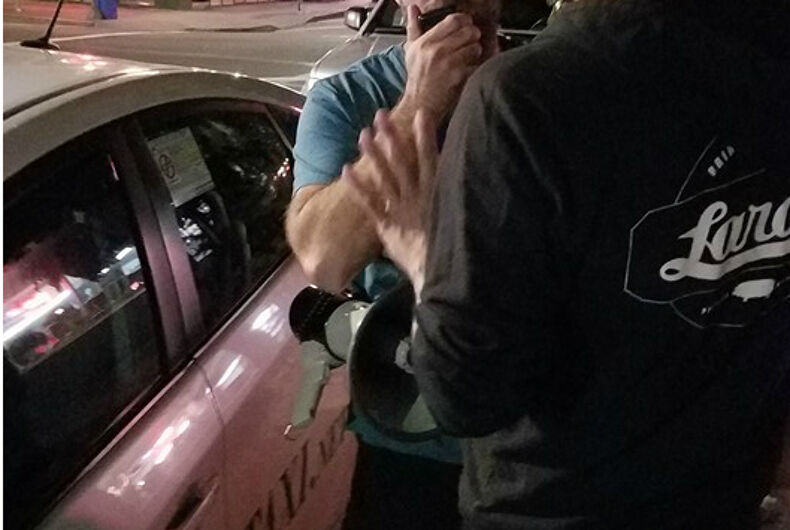 The taxi company apparently told multiple sources, including a reporter, that they'd prefer not to serve gay folks.Photo: Ty Toaster via Facebook

A Portland, Oregon cab company is facing criticism after it supported a driver who allegedly yelled anti-gay slurs at a man standing outside a gay bar.

According to KATU, Ty Raia was at Scandals with friends last Tuesday when a Portland Taxi cab pulled up and started to engage with them.

“He came out of the cab wearing a ‘God loves you’ shirt and I thought, this should be interesting. He went to his trunk and pulled out a bull horn,” Raia told KATU.

The man went on to tell the friends that they were going to hell for being gay. And while they weren’t too fazed by the encountered — Raia said it was “sad” more than anything — someone else called the company to complain.

“Another patron called the company to express their concerns that he was doing this while representing the company and he was told they don’t care,” Raia told KATU.

And a reporter from the station confirmed it. After defending the driver’s “First Amendment rights” the company told the reporter: “If the gays don’t want to use our company, that’s better for us.”

Yet another KATU reporter corroborated the company’s anti-gay attitudes from personal experience:

A KATU News employee also had a negative experience with this cab driver last March.

After giving this employee a ride home from the airport, he refused payment and told our employee he should be in jail because he was gay.

As far as Raia is concerned, he said he’s happy to give the company what it wants.

“They have openly expressed they are OK with queers not using their company so maybe that’s what we should do,” he said.