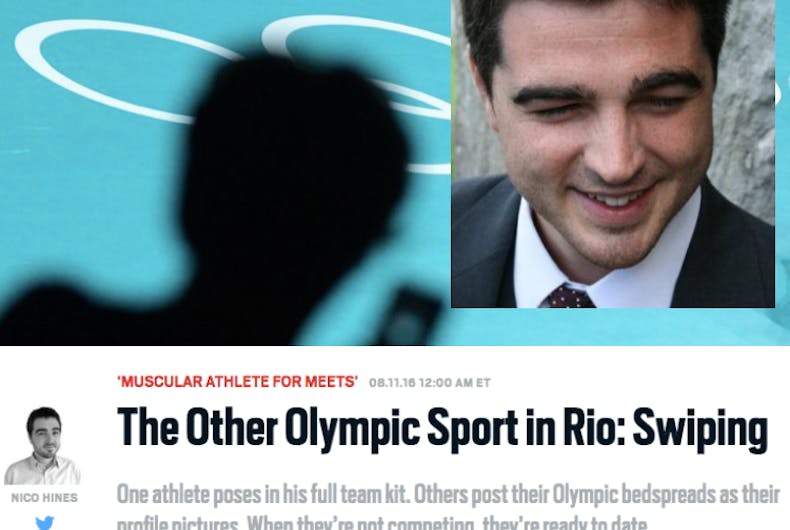 Nico Hines and the headline from his article outing gay Olympians

A straight journalist is under fire for using Grindr to essentially out closeted gay athletes in Rio.

Nico Hines has been covering the Olympics for the Daily Beast. As part of his reporting, he thought it would be hilarious to create a fake profile on the dating app then see just how many gay athletes were cruising for sex between games.

Hines was shocked to learn that Rio has become, in his words, “a hotbed of partying athletes, hookups, and sex, sex, sex.” Particularly gay “sex, sex, sex.”

While he didn’t call out any of the men by name, Hines did share quite a bit of identifying information about them, including the sports they played and the countries they were from.

“Athlete profiles on the various apps during my short exploration included a Brazilian track star, an Italian volleyball player, a South American record-holder in the pool, a sailor from New Zealand, a British diver, and a handball player from a notoriously homophobic country,’ he wrote.

Unless queer outing is now an Olympic sport, can we just all agree that @NicoHines piece is outright homophobia? Needs to be withdrawn.

The @NicoHines 'story' on Grindr and the olympics village is not journalism. It's trashy at best and incredibly dangerous at worst.

Bobby Finger at Jezebel called the article a “breathlessly written account of someone who appears to think gay sex is as mysterious as the prehistoric origins of Tilda Swinton.” And Mark Joseph Stern at Slate called it “a uniquely disgusting and irresponsible entry into the tired genre,” accusing Hines of taking pleasure in “luring in these Olympians then outing them to all the world.”

“But the offensive purpose of Hines’ article is really the least of its problems,” Stern adds. “Far worse is the actual damage it will likely cause to real, live human beings—inevitable consequences that Hines blithely ignored.”