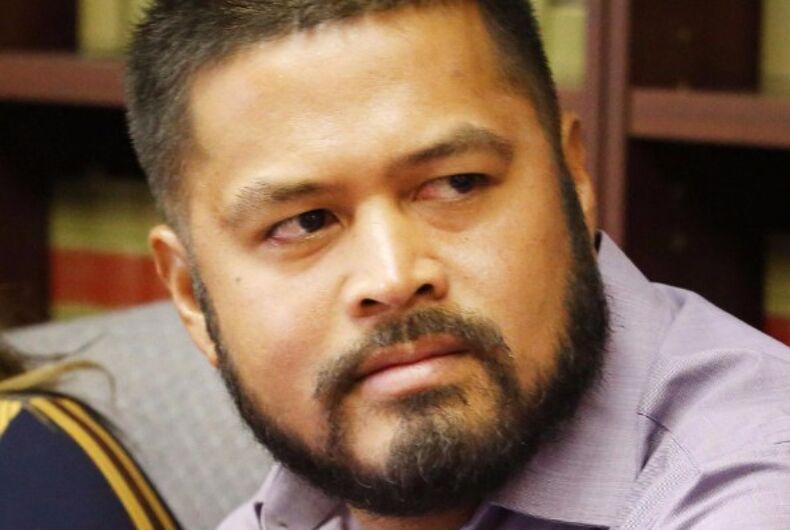 “I can still smell it,” says Orlando police officer Gerry Realin. “I still see all the red.”

Realin is talking about the stench of death, the blood spilled by 49 innocent victims of the massacre inside Pulse nightclub on June 12. He and seven other members of the department’s HazMat team were called in to remove the bodies once the scene was secured. Their grisly work took them four hours, and the trauma he suffered has not ended.

“There was just that smell that saturated my whole body,” he said while holding his wife Jessica’s hand. “My hair, my skin, my whole respiratory system.”

Realin told the Orlando Sentinel he has been diagnosed with Post Traumatic Stress Disorder. He returned to work after the shooting, which came on a vacation day for the father and husband. He was back on the job for two weeks, but he often called out sick or left before his shift was over. He then used his sick time and vacation days before a psychologist put him on paid leave. Realin wants to have that time reinstated.

But Florida is not one of the five states that pay workers’ compensation because of psychological issues suffered on the job, according to police PTSD expert Ron Clark, who runs the Connecticut-based group Badge of Life.

“Usually if you break your leg in law enforcement and have psychological issues, you go out on workman’s comp,” said Clark, a retired state trooper. “Not with psych-only issues.”

Now Realin’s attorney Geoffrey Bichler is challenging the constitutionality of Florida’s workers’ compensation law, which only pays state employees for their physical injuries, not psychological trauma.

“It is a travesty that there’s no legal protection for a guy like Gerry,” Bichler told the paper. “The law needs to protect them. As a society, we owe it to them.”

Orlando police spokeswoman Michelle Guido told the Sentinel Realin can apply to have the sick time reinstated through a disability committee. If it is determined the injury was suffered on the job, then it should be reimbursed, she said.

Clark estimated there are 100,000 officers nationwide with PTSD, but the law-enforcement industry has been slow to react to officers’ needs. They also have a higher rate of suicide.

“The man that left my house that morning did not come back to me that night,” said Realin’s wife, Jessica. “He’s still not back.”

His family and friends have established a GoFundMe account to help with the family’s finances while Realin is out of work and fighting for reimbursement. So far the fund has raised more than $5,800.

Watch the video of Realin telling his story here.

Tony Perkins: I never said God causes disasters, but He can and does