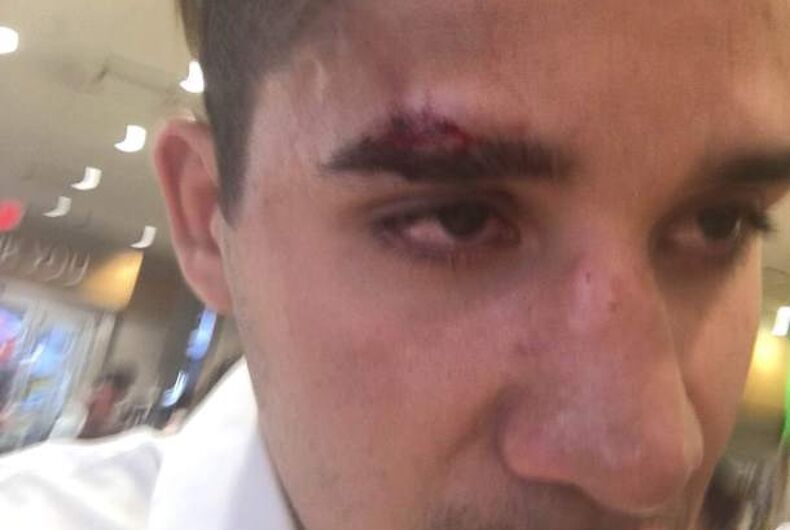 Omar Villalobos said it was bad enough that a crazed man hurled homophobic slurs at him Saturday, as the Chicago native walked along West 42nd Street in New York City, adjacent to Bryant Park. Then insult became injury when the homeless man punched him right above an eye.

“I was holding one side of my face, blood pouring down my hand and onto my white shirt,” he told the New York Post. It was 5 p.m. on a crowded Manhattan street, and this is where Villalobos’s story takes an even more unexpected turn, because this happened within sight of several officers of the New York City police department.

“There were six [police officers], all lined up on 42nd Street,” the marketing manager told the newspaper. Not one offered to help him or made a move toward his attacker, who also was standing right there.

“Not one of them did anything about it,” he told the Post. “They said they were there for terrorist attacks, not homeless people.”

Villalobos was attacked for being a gay man and he said the NYPD could not have cared less. Even bystanders who saw him bleeding begged for them to do something, he said. And the whole time, the blonde-haired, blue-eyed man who looked to Villalobos to be in his 40s, was within their easy reach.

“Two bystanders even came over to try and get [the officers] to help, and one of the cops goes, ‘All they’re going to do is put him in the mental clinic and then he’ll be back on the street in no time.’”

“He had been staring at us, really giving us a very hateful glare,” Villalobos told the paper, who recalled he had been walking with a friend, Natasha Dalanah.

“I was telling Natasha that I had never seen someone look so hateful. In my head, I very much dismissed it, though, because there’s crazy people in New York all the time who can’t control their facial expressions. But then out of nowhere, we just heard mumbling and then the word faggot.’ As I go to respond, he punches me right on my forehead, splitting me open right above my right eyebrow.”

Villalobos needed six stitches to close the wound. Before leaving the scene to get medical attention, he said his friend Dalanah tried one last time to get the officers to do something.

“She said, ‘Are you really not going to do anything about it?’ And one of the officers goes, ‘Does it look like we’re helping, find someone who cares.’”

As a result of Villalobo’s claims, the Post reports the NYPD’s Hate Crimes Task Force will investigate Saturday’s incident, but according to the paper’s sources, there will be no investigation into the officers’ behavior.

You can file a complaint about how officers treated someone by notifying the New York City Civilian Complaint Review Board. Contact the CCRB at 1-800-341-2272 or file an online report here. Or you can call the NYPD directly by dialing 1-646-610-5000.