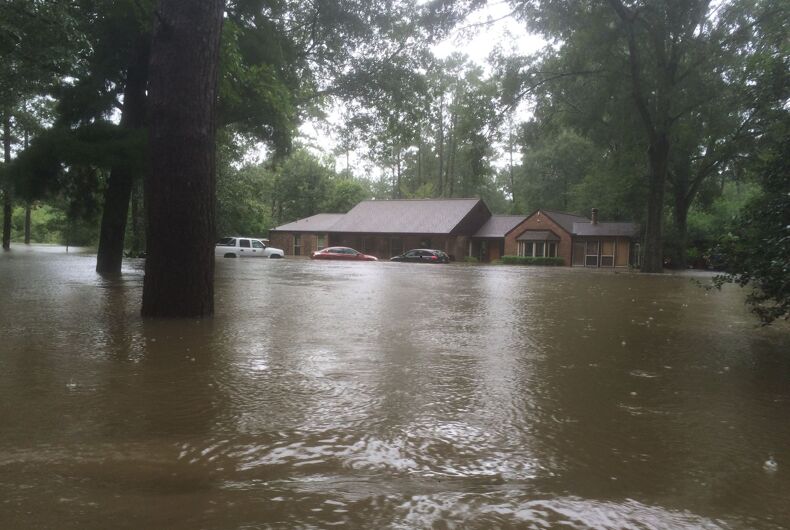 Remember those now-famous images of flood waters surrounding his Louisiana home, posted to Facebook by Family Research Council leader Tony Perkins earlier this month as he and his family fled in a canoe? The far-right conservative Christian leader was mocked mercilessly for what some interpreted to be “God’s wrath,” and apparently that displeased him.

Perkins issued a press release Wednesday to clarify his position on the Almighty and natural disasters, declaring the media had it all wrong, according to Joe.My.God.

“Deceptive claims are being circulated on the internet that put words in my mouth about God’s role in natural disasters and what causes them. Those claims are inaccurate,” he wrote.

“What I have said, which I repeated yesterday in a sermon at Greenwell Springs Baptist Church, is that I don’t know what was behind this flood or any other natural disaster. However, as a follower of Jesus Christ, I believe the Bible which makes clear that God is sovereign over the elements of nature and can and does use them for His purposes.”

“He also allows those same elements to be used as a means of testing our faith and devotion to Him. Is this a test of our faith or a chastisement from God? I don’t have that answer. Regardless of what’s behind natural disasters, our response should be the same – we are to be on our faces before God, giving thanks in everything, and placing ourselves in total dependence on Him.”

He goes on and on, God this, God that. But what might be more relevant is what Joe.My.God points out appeared in the New York Daily News, that last year Perkins had this to say in the wake of a hurricane that devastated the Bahamas:

“God is trying to send us a message.”

Man gets 40 years for pouring boiling water on gay couple