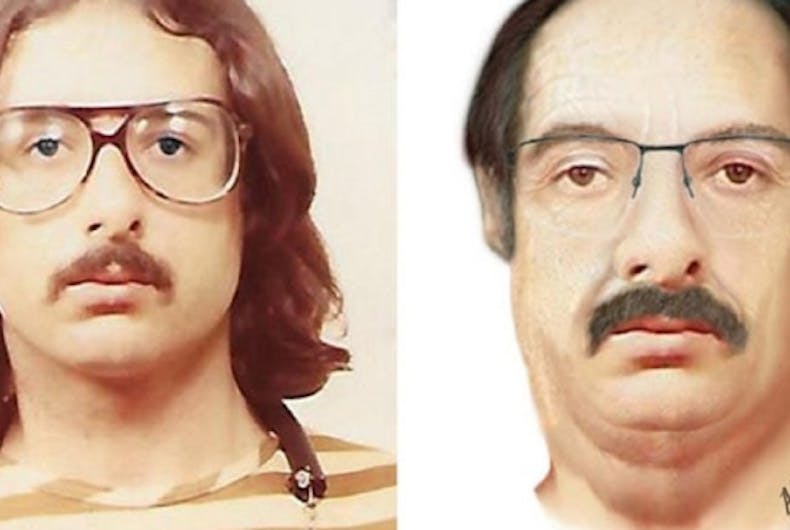 John Kelly Gentry, Jr. in a 1982 booking photo beside a computer generated image of what he could look like today.Photo: Monroe County Michigan Sheriff's office

After John Kelly Gentry, Jr. killed his girlfriend, Barbara Gerber, in 1983, police say he drove to a neighboring state and killed his boyfriend too. Police found the bodies, but they never found the killer. Now they say Gentry may be living in California as a woman named Kelly.

Gentry was fresh out of prison when he met Gerber in Michigan. While he told her that he had been locked up for defending a woman’s honor in a bar fight, in reality he’d nearly killed his ex-boyfriend by crushing his Adam’s apple. After moving in with Gerber, Gentry started a new relationship with 52-year-old William Veith in Toledo, Ohio. Police speculate that Gerber and Veith found out about each other shortly before the killings.

Gentry killed Gerber first, stabbing her repeatedly and slitting her throat. When her brother discovered her body shortly after the murder, he noticed that her car had also been stolen. Police found the car in Toledo.

Gentry had used Vieth’s Ohio home as an alternate contact address, so authorities went to the shop looking for more information, but only found Vieth’s body. He had been bludgeoned to death with an axe handle and several rare coins and jewels were missing from the store. Vieth’s car had also been stolen; it was recovered in South Bend, Indiana.

After Gentry went on the lam, clues to his whereabouts became scarce. The murder mailed a postcard to a friend from San Diego and a week later sent another postcard to his father from Los Angeles. After that the case went cold. A national arrest warrant was issued in 1988 that’s still active today.

Gentry would be about 63 years old if he’s still alive. He’s described as 5’7″ with brown eyes and hair. He has a circular burn scar on his left elbow and “LCI” burned into his upper arm according to police.

Police didn’t say whether or not Gentry is actually transgender or only trying to hide from authorities; the computer generated image released by authorities shows Gentry as a man. The criminal suspect’s DNA and fingerprints are on file and haven’t been matched since the murders, so he has either died or remained out of trouble while on the lam.

Anyone with information on Gentry’s whereabouts is asked to call detectives at (734) 240-7530.