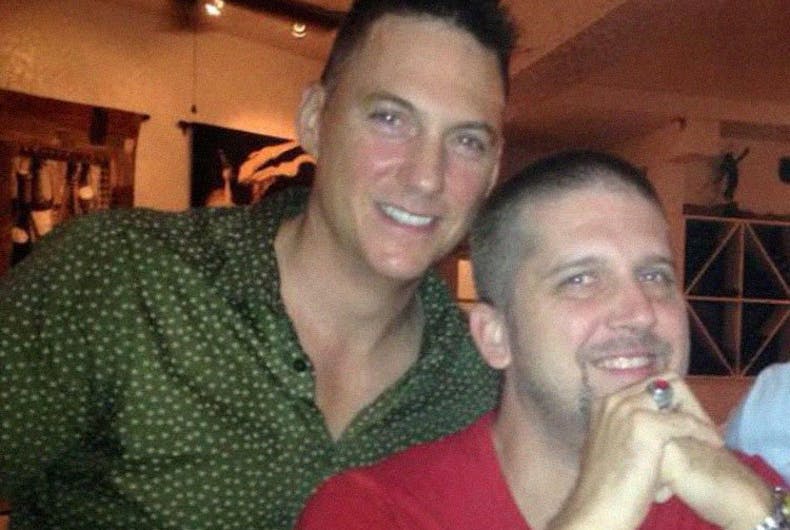 Kevin Seymour and Kevin Price were victims of an antigay attack in Key West by a Trump supporter.Photo: Facebook

Update: The man suspected of the crime, Brandon Ray Davis, has been arrested.

A man police suspect in the Key West, Fla., gay bashing of a couple who were told, “You live in Trump country now,” may soon find himself in new surroundings, jail.

An arrest warrant has been issue for Richlands, N.C., resident Brandon Ray Davis, 30, for felony aggravated battery with a deadly weapon, reports the Miami Herald.

The attack, which consisted of nearly running down gay couple Kevin Seymour, 38, and Kevin Price, 49, with a scooter while yelling homophobic slurs and insults, took place as the pair were riding bicycles around 1 a.m. on Feb. 23, they told police.

Seymour said he yelled out to the man on the scooter to warn him that he almost hit a car, which prompted a stream of insults, before the man began going after them with his vehicle. He knocked Price off his bike, throwing him to the ground.

“You guys are a couple of fags,” “I bet you faggots voted for that bitch Hillary” and “You live in Trump country now,” police say Davis screamed at the couple.

When Seymour threatened to call the police, Davis allegedly said, “If you do that, I’ll cut you up.”

Seymour and Price got the scooter’s tag number and police were able to trace it back to a rental shop, which then matched it to Davis. Detectives obtained a photo of Davis and the couple, as well as another witness, were able to identify him out of a photo lineup.

The attack is being considered a hate crime, meaning it will carry stiffer penalties for Davis if he is found guilty.

“Probable cause exists to believe there was evidence of prejudice in Davis’s attack of Seymour,” the warrant reads, as Davis “used explicit bias language in reference to their sexual orientation” and went after Seymour “without any provocation.”