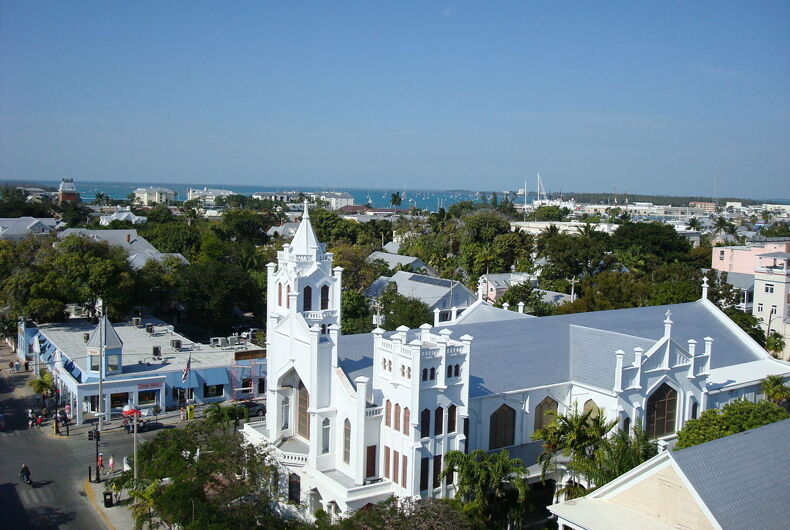 Update: Police have arrested North Carolina resident Brandon Ray Davis on suspicion of the crime. He is facing felony charges.

A drunken scooter rider in Key West chased two gay men and forced one off his bike while shouting politically-charged hate speech at them.

Kevin Seymour, 38, and Kevin Price, 49, said they were biking home from dinner late Wednesday night when a tourist in a scooter called them faggots and “a slew of other anti-gay remarks,” according to the police report.

The scooter knocked Seymour’s bike, throwing him to the ground.

“We were victims of a hate crime last night biking home from dinner. He kept stopping in front of us and swerving into us. Finally Kevin got ahead of him and the guy charges him with his scooter and runs into him and knocks him off his bike. Kevin is okay, Price wrote on his Facebook page, according to FL Keys News.

“I bet you faggots voted for that bitch Hillary,” the suspect reportedly said. “Well, you live in Trump country now.”

Seymour told the man that he was calling 911 while they were being chased. “If you do that, I’ll cut you up,” the man replied.

Police were called at 1 AM. One witness gave a statement confirming the men’s story.

Police described the scooter rider as a white man in his mid- to late 30s with “a southern accent” wearing gray shorts and a blue polo shirt.

Correction: Original media reports had Kevin Price’s name as Kevin Taylor, including this story which has been updated. We regret the error.