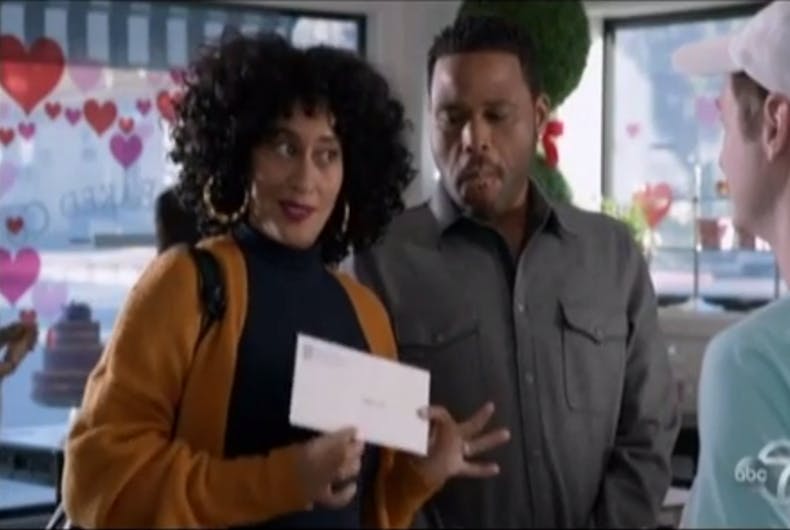 The ABC series, which focuses on a black family and deals candidly with race, tackled the hot topic of so-called “religious freedom” protecting businesses (like bakeries) from having to serve LGBTQ people.

In the episode, Dre (Anthony Anderson) and Bow (Tracee Ellis Ross) Johnson are shopping for a “gender reveal” cake for Bow’s upcoming baby shower. Dre, not knowing what to call the confection that contains pink or blue filling depending on the expected gender of the baby, asks for a “sex cake.”

Bow: We have a kind of weird request. Depending on what is inside this envelope, we want you to make a special cake that’s either blue or pink on the inside –

Dre: Come on, Bow. Get to the point, all right? We need a sex cake.

Bow: Uh, no, no, no, no. We’re not perverts. We are just having a party to reveal the gender of our baby.

Cashier 1: Yes. Oh, yeah, we can bake any kind of cake you want. Oh! Just as long as it’s not for a gay wedding.

The Johnsons, clearly disturbed by this notion, move on to another bakery. They ask about the shop’s stance on discrimination right out the gate.

“You don’t discriminate against people based on race, gender, or sexual orientation, do you?” Dre asks.

The new baker replies, “Do not like French-Canadians,” and the Johnsons decide they can live with that. It’s a comedic line, highlighting the absurdity of discriminating against customers based on who they are. But the conservative media watchdogs over at NewsBusters seem to be taking it literally.

“Hmmm, so apparently it’s ok to discriminate against people for who they are (French-Canadian) but not what they choose to do (go against the biblical form of marriage),” wrote NewsBusters‘ Lindsay Kornick.

Kornick goes on to claim partial victory because the couple moved on from the anti-gay bakery and found some place else to  bake their cake.

“At least the episode took the radical position that private business owners can serve or not serve whomever they like with customers free to simply take their business elsewhere,” Kornick argued. “Hey, maybe people CAN learn something from this show after all.”

Of course, the Johnsons would have had little other recourse, since they are presumably not gay and therefor not the ones being discriminated against. Same-sex couples being denied a wedding cake simply because they are gay is another story, as Sweet Cakes by Melissa found out in Oregon.

Watch the clip from “black-ish” below.