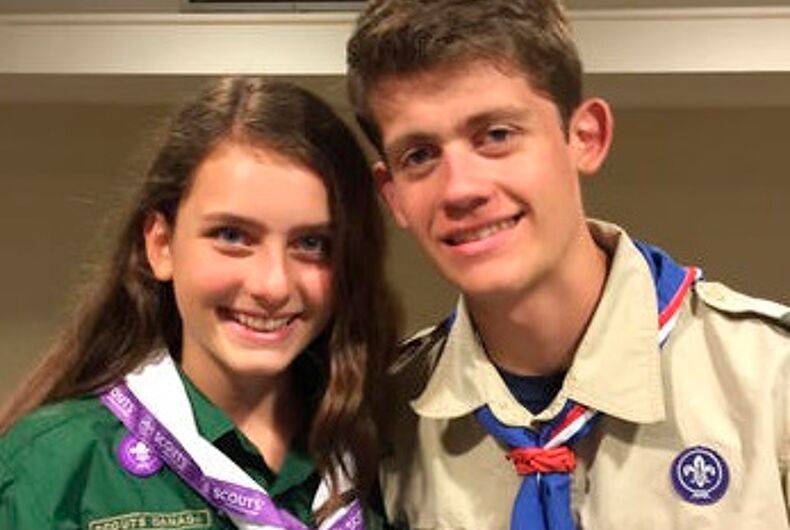 This June 2016 provided by their father, Gary Ireland, shows 15-year-old Sydney Ireland, left, of New York, with her bother, Bryan, who is an Eagle Scout, at a National Organization for Women conference in Washington. For several years, Sydney has been an unofficial member of her brother's troop in Manhattan, participating in many of its activities but unable to earn merit badges to start on the path to Eagle rank. (Gary Ireland via AP)Photo: The Associated Press

NEW YORK (AP) — After many years of divisiveness, the Boy Scouts of America have opened their ranks to gay and transgender boys. Yet a different membership dispute persists: a long-shot campaign to let girls join the BSA so they have a chance to earn the prestigious status of Eagle Scout.

Just last week, after the BSA announced it would admit transgender boys, the National Organization for Women issued a statement urging the 106-year-old youth organization to allow girls to join as well. NOW said it was inspired by the efforts of a 15-year-old New York City girl to emulate her older brother, who is an Eagle Scout.

“Women can now hold all combat roles in the military, and women have broken many glass ceilings at the top levels of government, business, academia and entertainment,” said NOW President Terry O’Neill. “It’s long past due that girls have equal opportunities in Scouting.”

For now, it appears the Boy Scouts will hold firm. Communications director Effie Delimarkos noted that the BSA already has some coed programs and might consider more of them, but views boys-only programs as a fundamental cornerstone of its mission.

“We’re certainly committed to finding program options that work for the entire family — it’s an area we continue to evaluate,” Delimarkos said. “But we also feel that the benefit of a single-gender program is an important priority.”

The goal of coeducating the Boy Scouts has a long history.

In 1995, a lawsuit was filed on behalf of a California girl, Katrina Yeaw, accusing the BSA of discrimination for rejecting her application to join. The case reached the California Supreme Court, which upheld the BSA’s right to set its own membership criteria. In 2015, a group of girls in Northern California formed an independent troop called the Unicorns and unsuccessfully applied to affiliate with the BSA.

More recently, New York City teen Sydney Ireland, supported by her father, attorney Gary Ireland, has been campaigning to join the Boy Scouts, which her brother, Bryan, has belonged to for a decade.

Among other initiatives, Sydney has posted a petition on Change.org and appeared in an online video that has attracted more than 2.6 million views. Via repeated road trips to London, Ontario, she’s also become a member of Scouts Canada, which has been coed since 1998.

For several years, Sydney has been an unofficial member of her brother’s troop in Manhattan, participating in many of its activities but unable to earn merit badges to start on the path to Eagle rank.

“Everybody in Troop 414 has been completely positive,” Sydney said in an interview. “They’ve never questioned why I want to be part of it — they know how great an organization it is.”

Sydney says her quest to join the Boy Scouts doesn’t reflect any disrespect of the Girl Scouts, which is independent of the BSA and has remained girls-only since its founding in 1912.

“The Girl Scouts is great for some people,” she said. “But the Boy Scouts should allow everyone in. I want that kind of experience.”

In her Change.org petition, which has more than 6,400 supporters, Sydney alludes to the prestige of the Eagle Scout rank — literally a badge of honor for many astronauts, political leaders and business executives. The BSA, on its web site, says the rank “has represented a milestone of accomplishment — perhaps without equal — that is recognized across the country and even the world.”

“I am determined to be an Eagle Scout,” Sydney declares. “It isn’t just a hobby, it’s access to some of the best leadership training there is.”

The Girl Scouts, unsurprisingly, contend their Gold Award is comparable to the Eagle Badge in terms of a young person’s achievement and civic mindedness.

While the Boy Scouts have established several coed programs, including Venturing and Sea Scouts, the Girl Scouts remain girls-only.

“We know that girls learn best in an all-girl, girl-led environment,” Bastiani Archibald said. “It’s unfortunate that some people still consider belonging to a male membership organization superior to belonging to a female one.”

Sonia Ossorio, president of the New York City branch of NOW, has a different perspective on the push to make the Boy Scouts coed.

“We feel the timing is right to be talking about this,” she said. “In the climate of disrespect for women that we’re living in, there’s a huge value in bringing boys and girls together to work in teams, to learn about respect and compassion and leadership, like only Scouting can do.”

© 2017, Associated Press, All Rights Reserved.
This material may not be published, broadcast, rewritten, or redistributed.
News (USA)
Boy Scouts of America