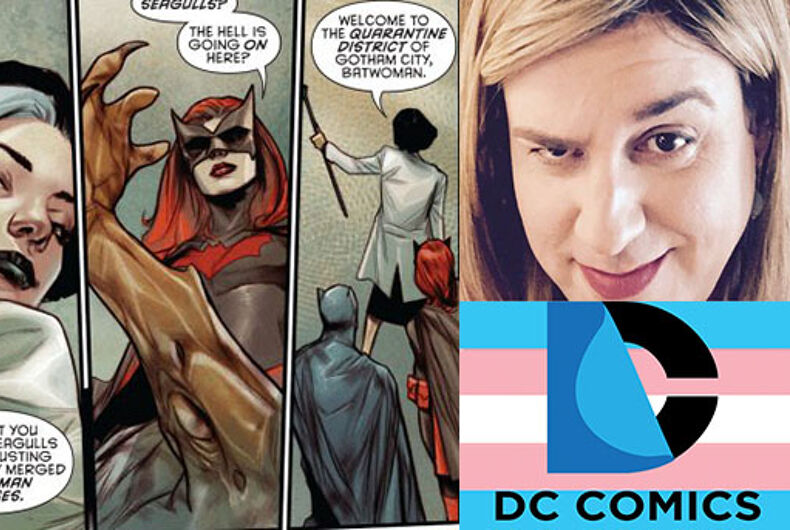 January is a big month for trans fans of DC Comics, as one of the iconic brand’s writers has come out as transgender, and the latest issue of Detective Comics pulls back the cape on Batman’s support for a mysterious new character, who just happens to be trans.

She is Dr. Victoria October, an unorthodox scientist in charge of a quarantined zone of Gotham City that she calls, “Monster-Town.”

Of course, October isn’t the first transgender character in mainstream comic books. That honor fell to Batgirl’s roommate, Alysia Yeoh, who came out as trans to Barbara Gordon, in a tearful exchange in April 2013.

But as Screen Rant told its readers, the gender history of Dr. October is treated more as an afterthought, a commentary, as she makes her first appearance with Batman and Batwoman, who next month will be the star of her own, new standalone comic book.

“The best part? The newest ally of Batman isn’t defined by her trans identity. In fact, if you’re not one of the people whose existence is validated by the character’s story… there’s a good chance you wouldn’t even notice it,” wrote Andrew Dyce. “The fact that most readers will simply take Dr. October as the woman she appears to be is a best-case scenario – and all that would be hoped for, in life, as in fiction.”

October hints at Batman’s acceptance in two frames, one alluding to their knowledge of each other pre-transition, and the next one marking her gratitude that the Caped Crusader would send her a card after she came out, marking Batman forever as a trans ally.

“When Batwoman notes just how unique a surname like ‘October’ actually is,” Dyce wrote, “Victoria confirms that the name is a self-assigned one to match her bold nature, admitting that ‘my deadname didn’t have half the panache, I’m afraid.’”

An unfortunate turn in Dyce’s otherwise affirming report is his speculation on October’s past, and whether she could be the new identity of Scarecrow. That kind of treatment flies in the face of true acceptance, even though trans people are well aware of the curiosity many cisgender folks have about our “deadnames” and our past, most frequently asking, “What’s your real name?”

The real name of DC Comics writer Lilah Sturges was revealed in a recent article about her coming out and by Sturges herself, in her late December “coming out” post on Facebook.

She wrote that she began her transition several months ago and that she was now living as her authentic gender — female — almost all of the time. And she acknowledged some folks will stumble on occasion:

“Please don’t avoid talking to me because you’re afraid of making a mistake. If you accidentally call me ’Matt’ or ’Matthew’ or refer to me as ’he’ or ’him,’ it’s NOT A BIG DEAL. I accidentally ’he/him myself’ sometimes! You don’t need to fall over yourself apologizing.”

And after a week of questions like, “Why?” and statements such as “I just don’t get it,” Sturges posted a longer answer to friends and fans:

Sturges is hardly the first transgender woman in the comic books universe, as NewNowNext reported. Sophie Campbell of Jem and the Holograms, Rachel Pollack of Doom Patrol and Magdalene Visaggio of Kim & Kim preceded her.

The writer of Justice Society of America, Shadowpact, Blue Beetle and Jack of Fables was hailed by her cisgender colleagues for her decision to come out.

“I am happy for you and in awe of your courage,” Marc Andreyko wrote on Sturges’s Facebook post. He’s the gay writer whose graphic novel, Love is Love, honoring the victims of the massacre at Pulse nightclub has hit The New York Times’ best-seller list. “You sure picked a helluva year to do this, though!”

DC editor Ellie Pyle has promised to get Sturges’s credits updated with her proper name.