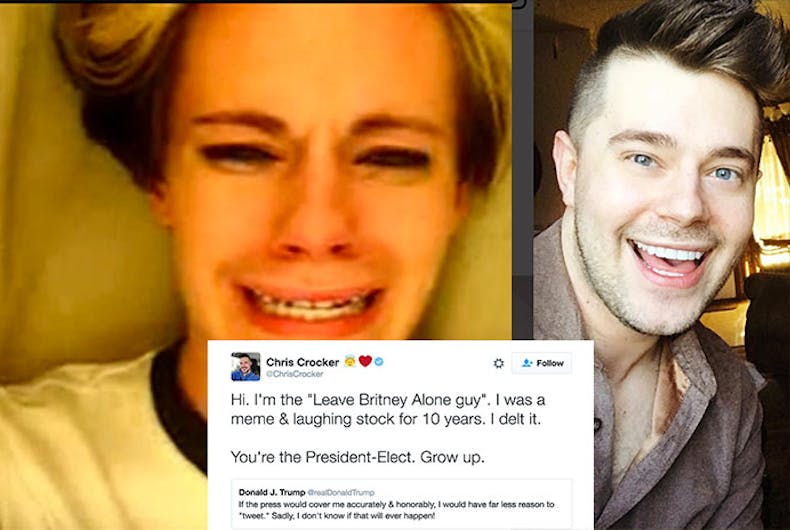 Nearly a decade ago after Chris Crocker shot to fame with an over-the-top plea to the world, posted on YouTube, asking haters to “leave Britney alone!” he’s back and hoping you’ll notice.

And in case you didn’t, he’s making sure somebody pays attention by tweeting at President-elect Donald Trump.

You're the President-Elect. Grow up. https://t.co/bsfdJb9WPw

Yes, that Chris Crocker, now 29, the one who admittedly oversold his condemnation of media critics of pop star Britney Spears. (“How fucking dare anyone make fun of Britney,” he hysterically cried in an extreme closeup. “What you don’t realize is that Britney is making you all this money and all you do is write a bunch of crap about her.”)

So in the years since that fateful September 2007 video, Crocker has transformed himself, as seen on his Instagram account. Today’s his birthday, and he invited his followers to share in the celebration.

As it is nearly a decade since anyone’s asked about him, one might think it’d be hard to find out what he’s been doing, but a quick Google search will show he’s been making gay adult videos with his then-boyfriend.

But it was our partner Queerty that broke the news about Crocker that hadn’t been reported before: in an exclusive interview, he came out as transgender.

“Some people get a haircut. I change genders or gender aesthetics. I don’t know that I’ll ever be content just one way or another. But I’m on the journey to figuring that out.

“It keeps coming up: do I want to transition? Because I’m getting older. I’m 26, and you start hardening in the face and everything else. So it’s hard, because I know I would have no problem completely transitioning for myself. … But I come from a Pentecostal family, so you know. And it would change our [his and Justin’s] relationship a lot. He says he would still stay with me, but I know he wouldn’t be as attracted to me. So I don’t know.”

Although he still has not undergone a gender transition, Crocker again discussed being trans in an April 2016 video on Facebook:

“I know a lot of people are just going to say just take a compliment and shut up. Who doesn’t like compliments, right?

“I wanted to say we should always feel attractive, not when society tells us we’re attractive. For many years of my life I have identified as transgender and I have not had the finances to transition and so living in Tennessee, living in a town where it’s not safe for me to be my full self. I’ve adapted to my surroundings.

“When I hear that I’ve gotten hot I immediately think was I just not hot before because I was androgynous?

“And although we all love compliments, we should… inner knowing of who we are and inner confidence beats a million people telling you that you got hot as long as you’re happy with the way you look.

“And as long as you know you’re expressing your true self that’s what’s most attractive. And to be honest sometimes I don’t know if I am being my full self. I’m being my full self as much as I can in the moment where I can’t do anything about transitioning.”

Earlier this year, a short profile appeared on AOL in February, titled “Whoa! Chris Crocker, the ‘Leave Britney Alone’ guy is totally smokin’ hot now!” Then in April, the British conservative anti-gay rag, The Daily Mail mocked him for an online rant against men who “don’t know what they have.”

The Huffington Post sat down with Crocker for an in-depth profile in May that explored more about his identity issues and his experience with sudden fame. In June our partners at Queerty broke the news of Crocker’s lip augmentation surgery.

Oh, wait, there’s one more: another flattering profile appeared in August in Too Fab. Again, labeling him hot.

For old time’s sake, here’s the YouTube video that made you a star: