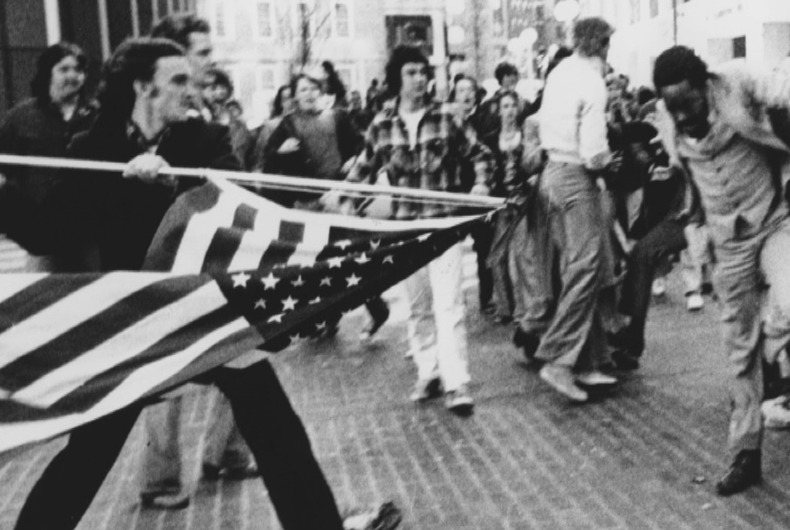 Founded as a private liberal arts institution, just down the road from my home stands Hampshire College nestled in the rolling lush hills atop the Pioneer Valley of western Massachusetts.

Soon following the election of Donald Trump as 45th President of the United States, a group of students lowered and burned their campus flag as a show of anger, resistance, and protest toward the person they saw as one of the most derisive and unqualified to hold the highest office in the land.

After the action, Hampshire College President Jonathan Lash, circulated the idea of not reinstalling the flag on campus to better focus attention on “addressing racist, misogynistic, Islamophobic, anti-immigrant, anti-Semitic, and anti-LGBTQ rhetoric and behaviors,” which increased nationwide throughout the election season.

In legal terms, though a person who steals or burns another’s flag can be charged with theft or vandalism, the right to burn the flag is a protected First Amendment freedom of (symbolic) speech right as outlined in the 1989 Supreme Court Texas v. Johnson decision.

Nonetheless, when President-elect Trump watched TV reports of the college flag burning, he felt compelled to rush off a twitter tirade. “Nobody should be allowed to burn the American flag – if they do, there must be consequences – perhaps loss of citizenship or year in jail!” he wrote.

Well, Donald, for this to occur, you would have to work with the Congress and with state legislatures to pass a constitutional amendment. But, if you feel these students should lose their U.S. citizenship or spend time in jail for their actions, what about you as well?

Should you lose your citizenship status when, as a candidate for the office of the presidency, you called for a religious test (contrary to the First Amendment) on anyone entering the U.S. by calling for a ban of Muslims and people from Muslim-majority nations?

Should you lose your citizenship status by calling into doubt the judicial integrity of a federal judge of Mexican heritage who was born and raised in the United States?

Hey, I don’t see the Red, White, and Blue flying above Trump Tower. Are you an un-patriot?

And though many people raise the flag on all major national holidays, what about the estimated 45% of eligible voters who failed to cast their ballots in the 2016 presidential elections? Should they lose their rights of citizenship?

I was struck by the juxtaposition of images a few years ago. One was where soccer fans exaltedly and with a sense of pride lifted and feverishly waved the Stars and Stripes to cheer on their team at the 2014 FIFA World Cup playoffs in Brazil.

The other was where U.S. citizens wrathfully and with a sense of scorn lifted and viciously waved those same Stars and Strips to protest and banish Homeland Security bureau buses carrying migrant children and families in Murrieta, California from entering a Border Patrol processing center in their community. Eventually, protesters forced the three busses to turn around and drive back to the Border Patrol facility in San Diego.

People on the busses had undergone long and brutal, often deadly, journeys through hot and barren deserts fleeing from crime and poverty in their Central American countries only to experience the cruel lie that Emma Lazarus’s call to “Give me your tired, your poor/Your huddled masses yearning to breathe free” does not apply to people with brown or black skin.

Watching the protesters on my television screen brought back painful memories of witnessing the racial strife erupting like a volcano covering Boston and its suburbs with its lava of bigotry during its history of mandatory busing from 1974 – 1988 to achieve public school racial integration.

One photograph particularly captured the depth of racial prejudice in our city. In horrifyingly stark terms, a white man, enraged expression covering his face, gripped a long pole carrying the American flag as if he were wielding a sharp spear lunged toward a black man who was seized and held by another white man.

Though raising and standing behind the very same flag, the drastic difference between the cheering fans and the jeering protesters represents a difference between “patriotism” and “nationalism” – terms sometimes used interchangeably, but that are unique and distinct.

That ‘Leave Britney Alone!’ guy from 2007 wants your attention again