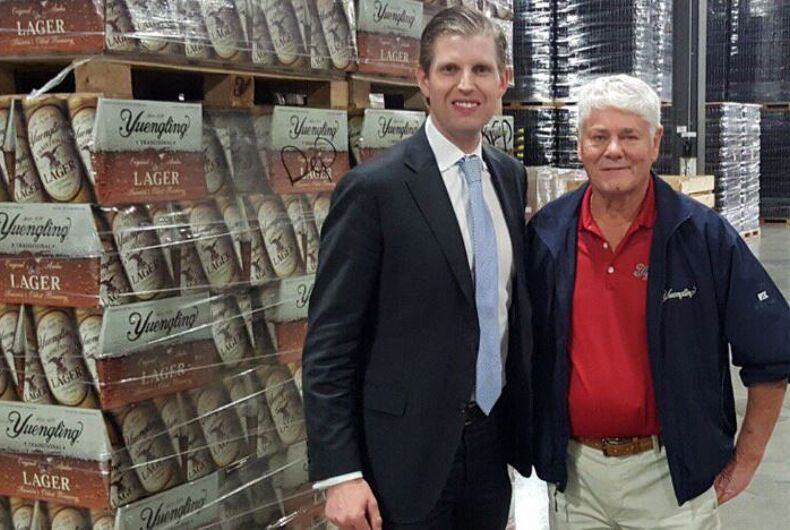 Eric Trump with Richard "Dick" Yuengling during a stop in the brewery on Oct. 24, 2016. Photo: Twitter

Donald Trump has been damaging his own brand with his bigoted, xenophobic, gaffe and scandal plagued presidential campaign, and the fallout is starting to spread to those who have unwisely hitched their wagon to his falling star.

“This is an amazing American success story,” Trump said during a brief news conference at the brewery, Reading Eagle reports. “We need a lot more of these.”

“Because of a great company like Yuengling, workers can educate their kids and live a prosperous lifestyle,” Trump said, making no mention of Yuengling’s history of union busting which actually made workers’ lives less prosperous.

“My father’s going to make it a lot easier for business to function,” Trump added. “We’re going to do it right here in the U.S.”

“Our guys are behind your father,” Yuengling said. “We need him in there.”

This quickly spawned a backlash with many beer drinkers calling on a boycott of America’s oldest brewery, Philly Voice reports.

“I’m not normally one to call for boycotts but I absolutely believe that how we spend our dollars is a reflection of our votes and our values!” Sims wrote in a Facebook post. “D.G. Yuengling & Son, Inc. believes that an agenda that is anti-woman, anti-immigrant, anti-LGBT, anti-racial minority and anti-equality is best for them and that tells me all I need to know about what they think is best for their own customers.

“I won’t reminisce about your product or lament any losses. Goodbye Yuengling and shame on you,” he concluded, signing it “A former customer of over 17 years!”

Washington, D.C.’s JR’s Bar manager David Perruzza has posted a video to his Facebook page showing him removing Yuengling from their lineup of beers on tap.

Trump has taken stances that are decidedly anti-LGBTQ as well, such as signaling support for the First Amendment Defense Act (FADA), as well as North Carolina’s anti-trans law HB2 and overturning same-sex marriage.

Billy Penn has compiled a list of beers you can switch to if you are joining in on the Yuengling boycott. Time to upgrade.