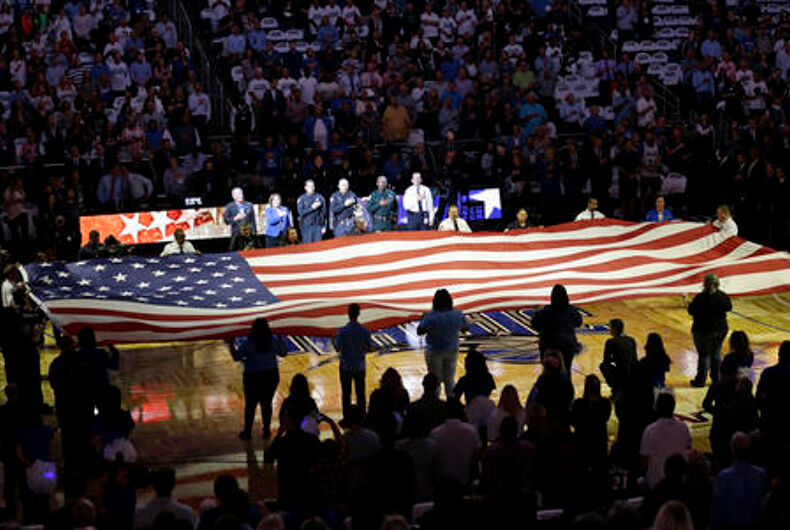 First responders hold a flag on the court as the national anthem is played during a tribute to the victims of the Pulse nightclub shooting prior to an NBA basketball game between the Orlando Magic and the Miami Heat, Wednesday, Oct. 26, 2016, in Orlando, Fla. Photo: (AP Photo/John Raoux)

ORLANDO, Fla. (AP) — There’s nothing that can give Mayra Alvear back what she lost, or ease her pain, or calm her anger.

With one gesture, she at least felt some joy again.

Underneath a softly swaying banner displaying the number 49 — commemorating the number of lives lost — and as first responders unfurled and held a massive American flag for the national anthem, the Orlando Magic paid tribute Wednesday night to the victims and survivors of the Pulse gay nightclub massacre with an emotional ceremony immediately before the team’s season-opener against the Miami Heat.

“We felt the recognition needed to be significant,” Magic president Alex Martins said. “We think part of the healing process for our community is making sure we don’t forget. And we felt it was most appropriate that we do it on opening night, so it receives the proper recognition and exposure — but also gave the greatest number of our fans the opportunity to recognize and remember.”

Some survivors were present, as were some relatives of those who were killed on June 12 in the worst mass shooting in modern U.S. history. The gunman, Omar Mateen, was killed after a three-hour standoff during an exchange of fire with SWAT team members.

“What the Orlando Magic are doing is amazing, is beautiful. I’m honored and grateful,” said Alvear, the mother of Pulse victim Amanda Alvear. “That they are lifting the number 49 out of respect, a symbol for our 49 Pulse angels, it has a deep meaning — demonstration of love and that they care, that all of them will be remembered.”

The nightclub remains fenced off, yet is still attracting a daily stream of mourners. Banners on the fence are dotted with thousands of handwritten messages from visitors, with some flowers and candles on the ground.

Martins was the chair of OneOrlando, a fund that collected $29.5 million in donations that’s being distributed to 299 claimants. At the time of the shooting, the Magic were just a few weeks removed from the hiring of Frank Vogel as their new coach, and less than three weeks away from a free-agent period where the roster would be greatly revamped.

“One of the ways that I felt I could help, that I could assist, was to help with the administration of the fund,” Martins said. “So I raised my hand immediately.”

The tribute coming before a Magic-Heat game was fitting, given how many of those affected by the events of that night were from South Florida.

It was particularly poignant to one survivor.

Heat employee Laura Vargas was shot twice that night. She can recall every detail — the strobe lights, the Heineken in her hand, how she was putting away her ID as she heard the first shots. She remembers watching Mateen reload a weapon, the blood pouring from her wounds, even the look on the police officer’s face when she was rescued.

Her best friend, Luis Vielma, who Vargas said was straight, was one of the victims.

“It’s not even just about me,” Vargas said. “It’s coping that he’s not there anymore. It’s a lot to carry around.”

Vargas isn’t able yet to resume work. She was at the arena the Heat call home last week for an event called “Loud And Proud” that celebrated the LGBTQ community, but couldn’t shake the feeling Mateen was there. Her flashbacks and nightmares are terrifying — she said she had “a total breakdown” recently at Disney when a fireworks show sounded like gunfire.

Nights like Wednesday, she said, make it all a bit easier.

“The love that’s come out of this is not fading,” Vargas said. “It brings me comfort to know that my best friend is one of the reasons why this world is a little bit less crappy, that his life isn’t just forgotten. No. He made a difference. And he would be happy to know that even with the chaos, the horror, he made a change.”

This was not a one-night commitment for the Magic, who have contributed both money and staff resources to the ongoing healing process and plan to continue. In addition to the banner, the team aired a video in tribute and invited singer Brandon Parsons — who composed a song called “Forty-Nine Times” — to perform pregame.

Parsons’ song included this phrase: “Takes more than just a gun, more than you to tear us down, so let your colors fly free.”

“It’s been so impactful since the day of that event,” said Otto Drozd, the Fire Chief for Orange County Fire Rescue. “This is part of the healing process. We continue to remember the 49 that lost their lives and those that were injured that night, and really, we do that because we don’t want to relive it.”